Paul Watson Is Back In Whale Wars 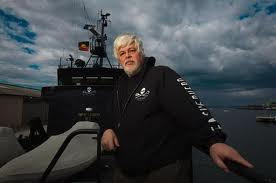 To some he's a conservation hero. Others deem him an eco-terrorist.
Toronto-born Paul Watson, undoubted star of the returning series Whale Wars, insists he's neither.
"I'm just a guy trying to get on with his job."
His job as he sees it is trying to stop the Japanese whaling fleet in the Antarctic.
"And maybe, just maybe, we have succeeded. every year when we go out on these missions the fleet gets less and less of a catych. And this year it's been down to the point the whale hunt is no longer economical. I think."
Whale Wars returns for its fourth season of derring-do on the high seas. Like all Reality Shows every chapter builds to a thundering climax and after the commercial break it's on to the next cliffhanger.
"Honestly, we do not try and manufacture crises," he says on the line from Los Angeles. "But we show how very dangerous this kind of pursuit can be in the Antarctic seas with those huge ice flows everywhere and the rotten weather that is always threatening."
This season the Japanese fleet went home weith only a fifth of their usual catch of 850 whales --"and that's because we pursued them, harassed them. It's absolutely preposterous to suggest that whaling is part of their culture.
"It was only started in 1946 as a make work project by General Douglas MacArthur. Consuming whale meat isn't a tradition at all. It's being consumed in decreasing qualtities as the older generation dies out. Younger Japanese don't eat it at all."
Reports Watson "They left over a month earlier than planned. We simply made it too difficult for them. And it no longer pays. I doubt they'll be back."
Watson says the huge ratings for Whale Wars demonstrates viewers feel they have a steak in the planet's ecology. The way we get to know the cast --many of them volunteers --gives us a stake in their adventures. In Episode One bad weather and leaking oil could doom the voyage before any sightings are made.
Williams made enemies in the Maritimes where he grew up when he took on the seal hunt.
"And it's no more. Again we made in uneconomical. As plain as that. And I think we'll have the same outcome with the whales. The Japanese are exploiting some ambiguities in the charter protecting the whales --at one time they were killing 900 whales a year purely for what they claimed were scientific study whatever that means."
In 2007 Watson persuaded Discovery Channel a documentary series on the Sea Shepherd's ongoing war against whales would make for exciting TV. One of his vessels, Steve Irvin, is named after the late, great Australian ecologist, the other the Bob Barker is named after the American game show host who has donated millions of dollars to the cause.
He didn't dream at the time it would ever hit four seasons.
Does that mean a fifth season of Whale Wars is an impossibility?
"No! We are currently after blue fin poachers off the Libyan coast --they are poaching right through the current war. And we are onto pilot whale hunters in the Faroes. We'll always have new causes to keep us going."
So a fifth season of Whale Wars is a "great possibility".
THE FOURTH SEASON PREMIERE OF WHALE WARS IS ON DISCOVERY CANADA THURSD. JUNE 9 AT 8 P.M.
MY RATING: *** 1/2.
Posted by james bawden at 11:52 PM