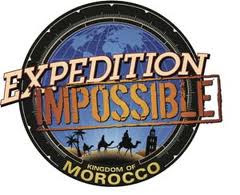 I have to admit I held off for days on viewing the preview DVD of the new series Expedition Impossible.
It's my aversion to watching too much reality TV, I guess.
But I finally had to watch to meet my deadline,
And surprise! I liked what I was watching.
Of course Expedition Impossible carries huge overtones of Survivor. But I think it's more fun and it's certainly faster paced --Mark Burnett who makes both The Voice and Survivor is listed as executive producer.
Sarnia native Dave Salmoni is the host as 13 teams of three people trek across sun drenched Morocco in search of TV stardom.
Salmoni is best known for hodsting Animal Plamet's Into The Pride series but he's right at home egging on this diverse band of adventurers.
Whoever selected this bunch obviously has a great sense of humor.
Some of the bands are, well, bizarre.Three former NFL players are bunched together as The Football Players.
Then there are the spicey Latino gals named Latin Persuasian who dress like the Khardasian gals and are caught squabbling in the middle of the Moroccan desert. One Moroccan guide says he'd never marry such women.
There are the Southern cowboys named The California Girls. And the pot bellied NY Firemen.
No Limits is among the most intriguing --one is blind but he has already scaled Mt. Everest.
Other groups: Fab 3 have two gay members and sport knee high socks that have local tribesmen chattering. Mom's Army includes just that, a Mom and her daughters. The California Girls are described as brainy beauties. And a sister trio call themselves Team Kansas.
Others: The Country Boys, The Fishermen, Grandpa's Warriors.
The way the hour is photographed and edited keeps us watching --there are no boring spots.
First up the competitors must saddle up camels and ride off to a towering sand dune.
Then they are instructed to find water the local way --that means digging into the ground to find water as Fab 3 are the first to discover.
And then there's a sheer cliff that the gangs must climb down on alpine ropes. The blond guy says he's not frightened like the others because he can't see anything.
In short the human elements are up front. Each week they'll face new Moroccan adventures. On one level it's silly but it's also fun. And it is summer. It's either Expedition Impossible or those dreaded reruns offered by the competition.
EXPEDITION IMPOSSIBLE PREMIERES THURSD. JUNE 23 ON CTV AT 9 P.M.
MY RATING: ***.
Posted by james bawden at 11:02 PM