Recessionize: A Funny Look At Our Monetary Woes 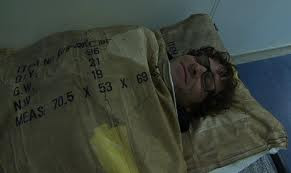 Is it just me or do other TV critics also wonder if every other documentary they watch has the name "Kastner" attached to it?
At University of Toronto I took a French course audited by actor Peter Kastner who later made it big in L.A.
My first week on the job at the Hamilton Spectator and I had to share an interview with Pete Seeger with writer Susan Kastner.
I don't think Seeger even glanced at me once during his two hours of rambling conversation with Susan.
Then came many first class CBC documentaries produced and directed by John Kastner.
And now I'm watching the new TVO film Recessionize by Jamie Kastner who I first met at the Toronto Star when he was a promising summer student.
Recessionize comes with a very cute premise: what did people do during the Great Depression that might be of use today.
And to find out Kastner got to take trips to Southern California, Amsterdam, London, Berlin and even Dubai.
In all these places he discovered and interviewed a truly eclectic mixture of subjects.
Then he packaged it fetchingly with old black and white shots of way back when mixed with scenes from his recent shoots.
The result is strangely upbeat. Hey, all of a sudden this lingering recessions seems like a blast.
Kastner's list of 15 top ways to fight back starts with an atfer school program for L.A. rich kids who are financially illiterate about the ways of the world. "Pay yourself first!" is the golden rule they're learning the day we pop in.
Then he discovers in Laguna Beach a married woman with kids who is a "home manager". She plunks her two kids and her furniture in a home up for sale and guarantees a certain homey touch that just might want prospective owners to buy into this dream. The downside: she has to be ready to depart within days if a sale goes through.
Some of these segments really work. In the Depression people sold apples. Today one unemployed male model bought and fixed up a "Green Truck" to peddle organic produce to office workers during their lunch breaks.
Another guy profiled repossesses private plans and has a hangar full of them ready to ship out. I guess when a company is slipping the plane is the first thing to go.
Another great profile, this time set in Amsterdam, examines an enterprising couple who make upscale bed linen inspired by street people. Hey, the sheets that look like container boxes are ever so chic.
And the House Of Envy in Berlin, a house of ill repute, facing competition and a lack of parking spots, offers cut rates to clients who bicycle over for services rendered.
I guess my favorite is the French hamster hotel where guests get a very tight room and a bed fashioned on a gigantic hamster wheel one can use for exercising as well as sleeping purposes.
Anybody suffering through the pangs of this recession should watch to instantly feel better.
RECESSIONIZE IS ON TVONTARIO SUND. JUNE 5 AT 11 P.M.
MY RATING: *** 1/2.
Posted by james bawden at 1:02 AM