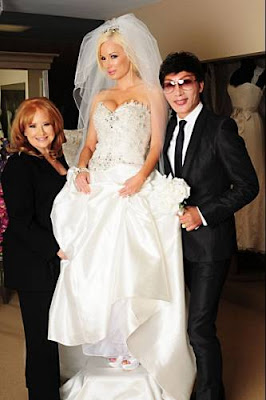 So here I am watching the preview DVDs of a new series Brides Of Beverly Hills.
And --surprise --I'm really liking what I see.
I took the challenge to actually watch the premiere episode and I kept watching through the next two episodes.
Yes, it's a dreaded "Reality Show" but I like these things if done half well.
In Brides Of Beverly Hills we visit the sumptuous bouitque of one of the area's biggest purveyors of wedding gowns. And BH is the ultimate site for this kind of display of the trappings of ostentation.
First of all we get up close and personal with the bubbling proprietor, chubby and Renee Strauss, her grown son who has a degree in psychology and her best bud, the flamboyant florist to the stars, Kevin Lee --remember how Marty Short burlesqued him so outrageously in the flick Father Of The Bride.
The first half hour shows us what we'll expect as two very different brides-to-be are shown in the process of buying their ultimate wedding dress.
One girl, Jennifer, wants the works, she's marrying an older sugar daddy and wants the most expensive gown as a symbol she's made it in upper classdom. Her wedding ring looks the size of Gibraltar and she needs just the right gown to set off her wealth and status.
The other customer is a Jewish daddy's girl, very family committed and even able to persuade her Philippine groom to switch to Judaism.
So the contrasts between the two make this a fun 22 minutes.
Episode 2 is even better as porn star Diamond Foxx sashays in with husband in tow and we get lots of dirty jokes about her trade and her Mae Westian figure.
In the other room there's another Jewish couple who try to pick a new gown with Cypriot designer looking on with makes for some choice moments of drama.
In the third we watch as two refugees from TV's Big Brothers chose the gown as a testament to their ardor and this is contrasted with a brother helping his sister making her choice.
Brides Of Beverly Hills comes with all the accoutrements of the Reality scene: there's always a big build up to every commercial break. Quick cutting forces us to make our own decisions about what gown should really be bought.
And we get to snoop in on family tensions as rifts and chasms erupt --it's always a battle for control --rarely does the bride get to make her own decision.
A boutique Toronto-based production company, Planetworks was formed by partners Romano D'Andrea, Carolyn Meland and Jeff Preyra.
Founded in 2003 Planetworks has made 186 episodes of Style By Jury, 65 episodes of Arresting Design, 13 episodes of Totally Tracked Down , 7 episodes of Chef Off and the 13-part Brides Of Beverly Hills which just might enjoy a long life with years ahead of blushing brides.
BRIDES OF BEVERLY HILLS PREMIERES ON SLICE THURSDAY JUNE 16 AT 9:30.
MY RATING: ***.
Posted by james bawden at 11:07 PM