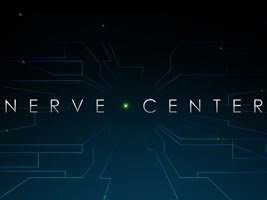 When the first two hour episodes of Nerve Center debuted on Discovery in May I hoped more would be coming along because this reality series works without the forced hoopla.
Sunday night at 8 there are two new hours and the first one focusing on Washington D.C.'s emergency response teams is pretty terrific.
It's just one day in the operations in America's capital city and everything seems to be happening.
First up there's a brutal high rise apartment fire that has huge flames bursting out of a ninth floor apartment while trapped residents above and below on other floors scream for help --the black billowing smoke is so dense they can't escape along the hallways.
We see the response team in action from the lady calmly answering the pleas for help at central despatch to the order for fire engines and the call to the police chief who's cruising the Potomac river giving a a seminar on rapid response.
How every facet gets there through the traffic maze and how residents are advised to stand at open windows but not to jump makes for a hugely exciting hour.
But wait! That's not all. There's a demonstration in one of the parks that swells to twice the anticipated size as ambulances get trapped trying to take the injured to hospitals.
There's a man who jumps on the subway line during rush hour and gets trapped under the wheels. And despite having his legs shredded somehow he has survived and the emergency crew must get him out with only 46 centimeters between the rail lines and the subway car. How they do this slowly but surely is one of the most gripping scenes I've ever seen recently on TV.
Expert editing keeps us on the edge of our seats. And there's still a marathon race to oversee, a woman trapped in an elevator and a fireman who winds up in pitch black entangled with live wires.
And how was your day?
One problem: ever commercial break is accompanies by a Perils of Pauline episode and the cumulative effect of watching so many rescues becomes positively exhausting.
By contrast the second hour on one day at Los Angeles' Central Port Authority is positively lethargic. We can learn all about the docking of huge tourist ships as well as gigantic container ships from China but there's nothing life threatening here no matter how it's hyped before each commercial break. But as a lesson in economics it's worth sitting through.
And there are still two more hours left in the six-part Canadian series made by Exploration Production Inc. (EPI).
made series.
PARTS 3 AND 4 OF NERVE CENTER IS ON DISCOVERY CANADA SUND. JUNE 12 AT 8 AND 9 P.M.
MY RATING: *** 1/2.
Posted by james bawden at 2:14 AM

The series is over, I think you missed two episodes tha aired Sunday, June 5, 2011. Those were Panama and ATL (Atlanta Airport).