Rookie Blue Back For Sophomore Season 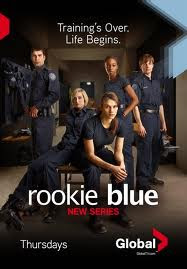 There was consternation on the set of Rookie Blue when I was asked what actors I wanted to interview for its sophomore season.
And I said none of them it was the creative executives I needed to grill this time out.
During the police show's first season I'd visited the set and interviewed the two main stars, Missy Peregrym and Gregory Smith, both young actors with a loads of potential.
But now it was time to hang out with co-creator Tassie Cameron and co-executive producer Ilana Frank, two very formidable veterans who managed to get their Toronto made series up on running on both Global TV and ABC.
"For a while it was touch and go," joked Frank, highly respected in the business for her CTV drama series The Eleventh Hour.
Rookie Blue (originally titled Copper) had been bought by ABC which fully intended to give it the first vacant prime time spot in January, 2010.
Then ABC executives watched warily as Global's fortunes seemed to spin out of control. "They didn't know what was happening," Frank says. "I certainly didn't know any more than they did. We were in a tense waiting game. They waited to be reassured that Global had the money to mount a second season."
The wait was oddly worth it as Global and sister Canwest affiliates were purchased by Shaw Media. ABC all along was convinced that the newly retitled Rookie Blue was going to be a hit.
And it was --starting in June, 2011. Simply stated viewers felt attached to the personal saga of five rookie cops on some unidentified North American police force.
"Casting made all the difference," Cameron says holding court in her office. Dhe knows all about guiding series to hit status --she was the showrunner on the first season of another Toronto made TV hit Flashpoint.
"Missy Peregrym was a find for us, people really started to care about her character Andy McNall. Of course she's beautiful but she's also athletic. Viewers could understand why Andy wanted to be a cop, that desire to help other people.,her conflicts with her dad who was a force veteran."
Biggest name in the cast is Gregory Smith who was outstanding as the teenaged Ephram on the WB series hit Everwood.
"When he came in to talk he said he wanted to play goofy, extroverted Dov Epstein," laughs Frank. "We were thinking of him for the more introverted Chris --that would have been cliched. But he willingly read, was terrific and it's a pleasant shock to see how outstanding he is. He brings a lot of Everwood fans with him."
I asked Frank about the first season review in the Boston Globe that said Rookie Blue should be more Toronto specific rather than trying to disguise its Canadian roots.
That was exactly what hindered her CTV effort, The Eleventh Hour. Set in a Canadian TV newsmagazine, the show was considered sensational in the acting and directing categories by the American networks who watched episodes and then reluctantly passed because of its unabashed Canadian origins.
The Toronto skyline gets prominently featured in the opening credits of Rookie Blue. In the first new episode I caught references to Queen's Quay and an Oakville hospital. The cops sport the Toronto uniforms but most forces have similar uniforms. For American viewers this could be Any City, USA, and if that keeps them watching, then, so be it."
Of course this isn't the first scripted TV drama about rookies --way back in 1972 I was on the set of a similar ABC show titled The Rookies as I interviewed Canadian actor Michael Ontkean.
"The emphasis is certainly on Missy's character and the other two young women," Cameron says. "It's about a police force trying to adapt to a new era and we show how carefully the five rookies need to be trained by veterans in every facet of police work."
Cameron says "The scripts are all important. We don't want to lose the focus which is on training, maturing as cops, bonding as a unit. Other stories may seem interesting but that's what the series is about. So I have to be very ruthless about keeping that focus. Because it's the reason viewers are tuning in every week --they become interested in our characters."
On location filming took place in both Toronto and Hamilton. Frank says Hamilton offers a wide variety of vistas not available in Toronto and filming there is cheaper what with the various production credits. "But on snowy days which we certainly experienced this season it can become quite tedious driving all that way on the QEW."
This season the "rookies" --actually now sophomores-- will continue to grow as police officers. In the first new hour episode, directed smoothly by David Wellington, Andy gets involved in the seemingly random shooting of a young girl who was standing in line waiting for tickets at a rock concert.
How that senseless killing affects her and her colleagues forms the fascinating core of the episode.
THe otjer rookies --Travis Milne as Chris, Charlotte Sullivan as Gail and Enuka Okuma as Traci--all have opportunities to shine.
"This year we have every kind of weather and that certainly makes the episodes look more diverse," Frank says.
In fact more series fail in their sophomore season than in their first year --perhaps the producers are not quite as fastidious as before.
"We're still in control," Cameron says. "It's not to take anything for granted, to keep that momentum and build on it."
Frank says the summer run in first year was a real gift in attracting an audience. "The thing is we have people at ABC who believed in this series all along. And Global is high on the series, too. But I know we can't take the first season success for granted."
Made by Entertainment One for Global TV, there are 13 new episodes this summer.
ROOKIE BLUE PREMIERES FOR ITS SECOND SEASON THURSDAY JUNE 23 AT 10 P.M.
MY RATING: *** 1/2.
Posted by james bawden at 11:35 PM