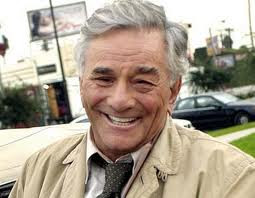 I always enjoyed going on the set of those Columbo TV movies and getting to chat up Peter Falk.
The greatish character star died yesterday at 83 after years of battling dementia.
Did you know the character was originally written for Bing Crosby who thought it might be too much work and took a pass (although Crosby's production company made it on the Universal MCA lot).
Falk loved being a big TV star and often made preposterous demands on NBC and Universal. HIs favorite co-star had been Patrick McGoohan, he told me because McGoohan was such a compelling actor.
Other faves: "Nina Foch in the first ever episode, Vera Miles, Janet Leigh, Ray Milland --all d-d good actors."
But Falk got especially excited when asked about those fantastic movies he made with John Cassavettes.
When I told him 1969's Husbands was among my favorite ever movies he slapped me on the back. Then he really grinned when I said 1973's Mickey and Nicky which he'd made with Cassavetes' wife Gena Rowlands was also right up there. I definitely did not tell him I considered another one, A Woman Under The Influence inferior to the other two.
Falk was resigned to the fact his bravura turn as the rumpled detective had made him a major TV player.
He starred in the original TV 1968 movie (although he wasn't seen for the first 30 minutes) and went on to make another 68 elongated episodes.
"Never thought I'd make it as an actor," he grinned and we both knew why. Falk had lost an eye at a age three and casting agents said the camera would pick up the fact one eye was glass.
But after stage work he copped two supporting Oscar nominations in the movies Murder Inc. and Pocketful Of Miracles.
"On the Frank Capra movie Bette Davis was the sole of kindness. I was very terrified working with such a great star but she reserved her bark and bite for our director."
Falk won five Emmys, four of them as best actor for his work as Columbo.
One time in Toronto I chatted up the creators, William Link and Richard Levinson and they told me they'd first created the character for a short story in Alfred Hitchcock's Mystery Magazine in 1961.
The very first Columbo was character actor Bert Freed who played the detective on TV's The Chevy Murder Show. Link told me he was too old for the part.
Then 70-year old character star Thomas Mitchell took Prescription Murder on tour as a theatrical play.
And the last was Dirk Benedict who took the same play on a British tour of the hinterlands in 1990.
The series began on NBC as part of a rotating Wednesday night mystery wheel that included McMillan And Wife, McCloud and later other whodunits like Banacek and The Snoop Sisters. But it soared in ratings when NBC moved the block to Sunday nights.
I may be the only person around who remembers Falk's first TV series, the short-lived 1961 series The Trials Of O'Brien but I thought he was excellent. But it lasted a grand total of 22 episodes.
I remember seeing him at one network party when he was sarcastic about the attempt to continue the series with a "new" character: Columbo's wife never actually seen on the original series.!
For years Falk had believed his wife was a figment of the detective's imagination used to trick suspected killers.
Then in 1979 a spinoff was ordered: Mrs. Columbo which eventually ran starring Kate McShane and had a very brief run.
Falk announced in 2007 he was attempting to shop around another episode called Last Case but his dementia meant he could no longer memorize lines.
In 1987 great film director Wim Wenders cast him as Peter Falk in the movie Wings Of Desire and then as an angel in the 1993 sequel Faraway, So Close.
And then reality began aping fiction. In a 2009 court case over custody of the actor his attorney stated Falk could no, longer remember who Columbo was --a strange, sad ending to such an important TV character star.
Posted by james bawden at 8:50 PM