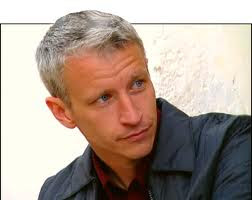 That was quite an all day party CTV threw for itself Thursday as befits the number one ranked commercial network.
The location, ironically, was the former Citytv headquarters on Toronto's Queen Street West. When CTV gobbled up the Citytv empire the part denied it were the former Citytv stations now owned by Rogers Media.
Last year the empire was CTVglobemedia --but The Globe was bought back by the Thomson family and Bell bought back CTV and renamed itself BellMedia.
To celebrate the new company a gaggle of American stars arrived for the festivities.
Look, there's Anderson Cooper, and his hair really is that white.
And Debra Messing was around actually promoting a new series Smash that won't even debut until midseason.
Girl watchers oohed and aahed as the four distaff stars of the new show Pan Am arrived: Christina Ricci, Margot Robbie Kelli Garner and Karine Vanasse.
Their show might best be scribed as a variant on a certain popular cable show --it could well be titled Mad Women.
And there was standup sensation Whitney Cummings who stars in the quite risque (for network TV) sitcom Whitney.
And four of thestars of The Big Bang Theory also showed up: Mayim Bialik, Melissa Rauch, Kunal Nayyar and Simon Helberg.
I once interviewed Mayim when she was the perky star of the teen comedy Blossom.
She took 12 years off from acting to garner her PhD in neurosciences.
CTV sources insist their web has the brightest new series including the second revamping of Charlie's Angels, Hank Azaria in the new sitcom Free Agents, the crime drama Grimm, the heartfelt drama Man Up with Mather Zickel, Poppy Montgomery in the crime drama Unforgettable, Simon Cowell's The X Factor, Christina Applegate and Will Arnett in the sitcom Up All Night.
Anderson Cooper proved polite and enthusiastic as he promoted his new hourlong daily talk show. Instead of seeing himself as Oprah's successor he invoked the memory of Phil Donahue several times and seemed to favor a cross off between star interviews and touchy feely people features.
He'll tape his shows by day and continue evenings to anchor his CNN gig.
Whitney's sitcom was a riot --as least the pieces shown to the press and marks a return to the sitcom format of a three camera show taped before a live audience.
And far from looking like a girlie show Pan Am profiles the behind the scenes exploits of stewardesses in the era when people still dressed to travel and the women were relentlessly exploited. For verisimilitude the actresses had to wear contemporary girdles and behave in an unliberated way.
Biggest internal news at CTV is the absorption of the A Channels into a new weblet titled CTV Two.
On CTV there are few if any Canadian series outside of ETalk weeknights at 7. In daytime it's an almost ceaseless flow of U.S. simulcast product with the exception of Marilyn Dennis at 10 a.m.
CTV Two, however, does have some Canadian series including W5, Degrassi (weeknights at 7), Flashpoint, the Listener.
CTV did announce that Toronto-made Flashpoint has been renewed for another season of new episodes.
The booze and dainties flowed at the party at Sony Center for the crowd of potential advertisers who seemed mighty enthusiastic about the new product.
I duly mingled and caught up with Lloyd Robertson. I reminded him of the CBC fall launch in 1976 I'd attended when CBC News head Knowlton Nash jumped up and said "I've lost my Mr. Clean!" --a reference to Lloyd's defecting to CTV. whereupon the entire cadres of TV critics jumped in taxis and sped off to CTV's Charles St. headquarters.
Catching up with producer Linda Schuyler, creator of Degrassi was not hard at all. I'd written the very first story on the iconic show way back in 1979 (titled the Kids Of Degrassi street). Schuyler informed me the new season order was for 45 new episodes, an indication of Degrassi's continuing popularity.
Riverdale was another Schuyler creation, a CBC soap opera that needed a full year to get started up --if CBC had stuck with it I'm prepared to say it would be as popular as Coronation street today.
But I was onto Brent Butt and his wife/leading lady Nancy Robertson on hiccups. Butt says he could have continued with Corner Gas for years and has even had an offer to remount it as a stage musical.
Behind a pillar I shared horror stories over the state of journalism with renowned sportscaster Brian Williams. He says he's already studying up for his role as CTV's host newscaster for the 2012 London Olympics.
"At one time TV sportscasters were second to the print guys. Now newspapers have fallen on tougher times than we could ever imagine."
And with that I sneaked out a side door and sprinted for freedom. Judging from the noises inside the revelers were determined to go on and on.