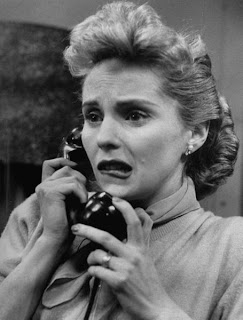 After 72 years as an afternoon soap opera Guiding Light has been cancelled by CBS. Low ratings are the blamed: in the U.S. the hour soap is down to a mere 2.17 million viewers a day which is far from its glory days of daily audiences around eight million.
What is happening to the soaps? The exiting of GL this September leaves CBS with three soaps, ABC with three and NBC with just one.
What went wrong? Well, soaps have simply run out of contentious issues. Every soap seems to have at least one gay couple and GL has dramatized such issues as AIDS. But there's nothing shocking left to dramatize.
I remember when my family got our first TV set in 1952. I could run home at lunch to watch CBS's Search For Tomorrow at 12:30 and then The Guiding Light at 12:45 --soaps were exactly 15 minutes long back then. They were also live and in grainy black and white.
The Guiding Light was created in 1937 by Irna Phillips as a live 15-minute radio drama on NBC. It was on TV as a 15-minute soap from 1951 and in 1967 went to color. In 1968 it became a half hour and then an hour in 1977. By the time it leaves this fall over 15,700 episodes will have been shown.
And why were they called soap operas? Because Proctor And Gamble owned many of the original series to peddle its various soaps and detergents.
There is a Canadian angle in all this: actress Susan Douglas was one of the early stars and after she married tenor Jan Rubes and moved to Toronto she'd still fly in to New York city every week for additional episodes. She finally irritated show creator Irna Phillips so much that her character of Kathy was killed off --she fell under the wheels of a bus, as I remember. I also remember Zina Bethune played her daughter Robin on the daily soap.
One week in 1977 I spent an entire week on the set of the New York soaps. I interviewed Chris Reeve on the set of CBS's Love Of Life.  I spent a complete day on the set of NBC's Another World. And another day was spent watching how CBS put together a live episode of As The World Turns.
In those days soaps were hugely watched and appreciated and such actors as Warren Beatty, Demi Moore, Robert De Niro and James Earl Jones got their starts on them (Mary Stuart on Search For Tomorrow told me she remembered De Niro as a corpse).
But times changed, it's as simple as that. Women started working and no longer were at home to enjoy these long, leisurely serials. However, college kids continued to dig soaps when they were away at school because they were reminders of life back home.
Every time I get the flu I simply laze in bed and watch soaps. With the number continuing to dwindle that may no longer be possible in my future flu attacks.
So what am I going to do?
SIDEBAR: Don't let people tell you there have never been Canadian TV soaps. What about CBC's House Of Pride  (1974)? Or how about the soap shot at CTV studios in 1978 called High Hopes (starring Bruce Gray)?  And then there was another one also shot at CFTO: Family Passions (1993) with Jonathan Scarfe. And let's not forget Riverdale (1997)--remember that one?
NOTE: PICTURED SUSAN DOUGLAS RUBES AND THE CURRENT CAST.
Posted by james bawden at 10:19 PM