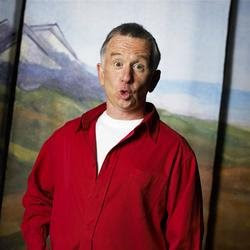 CBC-TV's fall schedule looks suspiciously like the one just ending. Why? Because the cash starved publicly underfunded Corp hasn't the means to mount the bold new season needed to attract viewers.
Back are two hour long dramas The Border and Heartland but the third dramatic hour Wild Roses is out after drawing anemic ratings. In other seasons when CBC was flush Wild Roses would have won a reprieve for a second season.
There'll be another "unreality" outing pitting hockey players as gitzy professional pairs skaters called Battle Of the Blades, While other networks are starting to bail out of the discredited reality mode CBC is storming ahead. Don't ask me to explain this.
The sole piece of good news has veteran Ron James returning in a new comedy. Now James is as funny as all get out in those wonderful one man comedy specials he makes. And hopefully he's learned from the mistakes made in mounting the ill fated 2001 sitcom Blackfly.
In another new series Canada's Super Seller Evan Solomon plays game show host as 12 great young spellers battle it out to become Canada's Super Seller.
The winter season will see the debut of an hour drama The Republic Of Doyle set in St. John's, Newfoundland. Also new will be a domestic comedy titled 18 To Life.
There are no new TV movies listed, no new Canadian miniseries.
I can't find any mention of the arts which has sent many upscale viewers scurrying to PBS for their cultural fix.
Such staples as Little Mosque On The Prairie, Rick Mercer, This Hour Has 22 Minutes, The Tudors, Dragons' Den, Being Erica are back but some with a reduced number of episodes.
Posted by james bawden at 11:46 PM