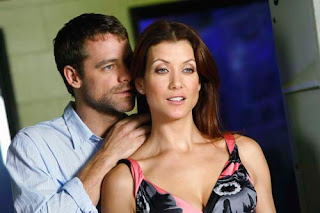 ABC is the first American network out of the gate in announcing most of its fall lineup.
It's a huge relief to report Ugly Betty is coming back --the network had been worried over a ratings free fall this season.  Ugly Betty was taken off for several week and sitcoms tried out in its slot but they fared much worse in the numbers race.
And also back is Private Practice which only seems to thrive when it follows Grey's Anatomy.
Other ABC hits getting early season pick ups include Desperate Housewives, Brothers & Sisters, Dancing With the Stars, Extreme Makeover: Home Edition, The Bachelor, America's Funniest Home Videos, Supernanny and Wife Swap.
Missing from the list I've seen: The Unusuals, Scrubs, Cupid and In the Motherhood. Also missing are the new shows Cupid, Samantha Who.
ABC will only agree to renew Desperate Housewives one season at a time meaning executive producer and creator Marc Cherry does not get a renewal for four more seasons as he wanted.
And where is Lost? That one already has a renewal slip from ABC for at least one more season.
ABC's formal announcement of its new season doesn't happen until next month before potential advertisers in New York city.
ABC also says it will program aggressively this summer with fewer reruns than usual. On Sunday May 24 and Tuesday May 26 ABC has the miniseries Diamonds with Judy Davis (already on CBC)  which was partly filmed in Canada. And June 21 and 26 there's another "mini" called Impact with Canadian expatriate David James Elliott. the mational Spelling Bee is on May 28 as well as a slew of ABC news documentaries.
PICTURED: KATE WALSH STAR OF PRIVATE PRACTICE AND GUEST STAR DAVID SUTCLIFFE.
Posted by james bawden at 10:38 PM

Given Greys has killed every other show that has followed it, Private Practice is doing something right. Only show off air for 10 months from the writer's strike season to be renewed so far.