A Tale Of TV's Teen Hunks 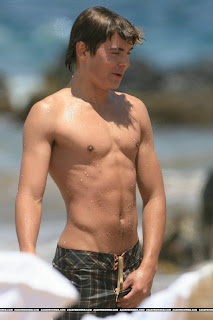 Let's all give rising teen hunk Zack Efron some slack. After all the personable young man (actually he's 21) seems poised to make that magical jump from TV notoriety to genuine movie stardom.
Good luck to him, I say. But after viewing his first solo starring venture 17 Again I'm willing to bet he might wind up back on TV in perhaps in a sitcom of his own.
After all that's  exactly what happened to Michael J. Fox: from Family Ties to movies and then back to TV with Spin City.
I'm all too familiar with the trials and tribulations of TV teen hunks. Their actual age may be older --but it's the screaming teen girlies who give them their box office clout only to precipitously take it back to bestow on the next hunk du jour.
TV hunks just don't last very long. It isn't so much that they're growing up it's their fans. Girls who swoon after Efron today will become embarrassed by their emotions a few years from now.
Look, I know what I'm talking about. Way back in 1973 I interviewed the dazzlingly handsome newcomer David Cassidy on the set of The Partridge Family.
I'd already covered him the year before at a sold out concert at the CNE Stadium before 30,000 screaming fans.
The next year he was back at the CNE but the size of the crowd had dwindled and  by the third year his teen stardom days were fast dwindling. He was promptly replaced by younger brother Shaun who had the same exerience of going from mass hysteria to indifference in just a few outings.
So far Efron is doing all the right things. He came to attention in two Disney High School Musical TV flicks but the third one was released theatrically to a North American gross of over $251 million.  And Efron was also prominently featured dancing again in the theatrical flick Hairspray.
In 17 Again he's plainly the star with Friends' Matthew Perry reduced to playing the square oldster.  Efron not only dances here, he romances, he plays basketball and he takes his shirt off --a requisite for any teen hunk.
What are Efron's chances for survivability? Well, I remember a rather unkept youth who attended a press conference for his series 21 Jump Street and a lady TV critic bawled him out for looking so disheveled.
Yeah, it was Johnny Depp and that was in 1989. In the next 20 years he has defied all odds to become a bona fide movie star.
And so did Leonardo di Caprio who I once saw on the set of TV's Growing Pains.
I didn't interview him because he was considered a lesser cast member ; instead I wanted to meet red hot Kirk Cameron then riding high as a teen heart throb.
That was in 1991 and today di Caprio is one of movies' most respected actors while Cameron maintains a low profile.
I could name other teen hunks who've gone nowhere: Bobby Sherman, Parker Stevenson, Joey Lawrence, Patrick Cassidy, Ben Savage are a few names that come to mind. But I also interviewed John Travolta before he became a sensation on Welcome Back Kotter and look how long he's lasted.'
That's why I'm rooting for Efron who seems like sane, sensible young fellow. He's wisely decided to withdraw from the remake of Footloose figuring his dancing days are over.
Efron craves respectability in serious dramatic parts and if he gets the right roll of the dice he could wind up as successful as Depp or di Caprio, two ex-TV hunks who beat the system.
Posted by james bawden at 8:45 PM