Farrah On My Mind 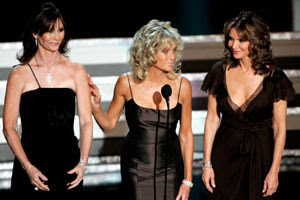 These days I'm thinking hopeful thoughts about Farrah Fawcett, the TV icon bravely battling a recurrence of cancer.
I first spotted her on the wonderful (but short-lived) detective show Harry-O(1974-76)  starring David Janssen. She was a beauteous girl-next-door and she certainly stood out.
That was in 1976, the same year she burst forth as Jill Munroe on the prime time caper Charlie's Angels.
Let's face it that show was all glitter. Who cared about a sensible plot with three such lovely ladies cavorting in bikinis or running up and down the beach in their shorts? Besides Farrah there were Jaclyn Smith and Kate Jackson.
Once when chatting up Jackson she grudgingly admitted without the Farrah explosion, Charlie's Angel's would have been toast.
In a brilliant publicity coup engineered by agent Jay Bernstein posters of Farrah popped up everywhere --eventually 12 million copies were sold.
Farrah-mania was on and it was so strong Bernstein persuaded Farrah to jump to movies even though she had a contract with TV mogul Aaron Spelling.
Eventually a lawsuit settled the matter: Farrah returned to CA in a few guest spots and Cheryl Ladd took her place as younger sis Kris Munroe.  On Ladd's first day on the set she wore a T-shirt that read "Farrah Fawcett Minor". Oh, dear!
Later substitutes includes Shelley Hack and Tanya Roberts but neither made much of a splash. Spelling was TV's greatest schlockmeister. He tried a variant of CA with the pilot Jo's Boys with Barbara Stanwyck as a female Charlie and three male bimbos. It was no sell.
See, a movie career never really materialized for Farrah. She was all hair and no real personality of her own. TV fame had frozen her in a time capsule. As far as basing a cviabke areer on poster art: it can't happen.
Farrah lived off her 15 minutes of fame with TV movies and in later years could be quite impressive in such teleflicks as Margaret Bourke-White and The Beate Klarsfeld Story. Just for the record she made two flop attempts at TV series comebacks: Good Sports (1991) and Chasing Farrah (2005).
I wish her well. But I'm thinking back to the emerging TV goddess who was presented to TV critics at the 1976 launch party for Charlie's Angels. Boy was she nervous that night. She giggled a lot, ate nothing, autographed stills and talked about life with Lee Majors. She was Farrah Fawcett-Majors by then and later ran off with Ryan O'Neal and shortened her name.
I'm guessing she never knew what was in store for her. She achieved great fame but it wasn't the kind of popularity she could really do much with at the time.
It took several more decades before she had any respect as an actress. And like so many TV stars of that era she never really made it in movies.
NOTE:THE PICTURE IS OF FARRAH, JACKSON AND SMITH IN 1976.
Posted by james bawden at 9:19 PM