It's Time For Cliffhangers! 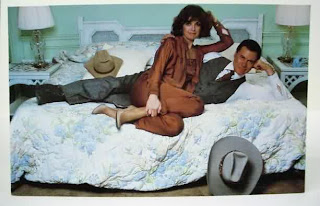 Those midnight phone calls have started up again. And that means  it's just about time to welcome back TV's cliffhangers.
One familiar voice whispers the denouement of Lost and what he's saying makes sense. Another source has all the news about the finale of Prison Break which is ending its run so it's not technically speaking a cliffhanger.
Another authority gives me the low down on Gray's Anatomy and how that hospital melodrama will end. Yes, there will be a death but I'm honor bound not to give the name out. But I can say there'll be guest stars a-plenty incliding Kaley Cuoco (Big Bang Theory), Liza Weil (Gilmore Girls) and Debra Mooney (Everwood).
Cliffhangers! Where would U.S. TV series be without them?
Well, it just so happens I was in L.A. for the very first cliffhanger. And, yes, it was the infamous "Who Shot J.R. ?" episode of Dallas that climaxed the first season of that prime time slice of Texan ham.
Before 1979 cliffhangers were frowned on by studios and networks alike. Networks felt it forced them into running episodes in a specific order and studios said they were bad for the rerun market.
Here--let me give you an example of the impact of reruns as powerful then as now. In May 1977 the still popular Mary Tyler Moore Show ended its run and star MTM had to insist on a farewell episode despite opposition from CBS.
In that hugely rated half hour most of the staff except Ted Baxter were fired and Mary got to tell them they were all her family. But CBS and even her own production company were afraid the big good bye wouldn't play in reruns.
It was the same for cliffhangers. Most shows simply slid off for the summer so that studios could package them in any order for the lucrative rerun market. Rerunning cliffhangers meant subsequent episodes explaining all the plot convolutions would have to be run in subsequent sequence.
And then along came Dallas. It debuted on CBS as a short run series in April 1978.
It returned in September 1978 for a full season, still struggling in the ratings because it was on Saturday nights at 10. A move to Sunday at 10 produced no ratings boost. Only when CBS in one final desperate ploy moved it to Friday nights at 10 did it blossom.
But at the conclusion of the 1979-80 season the relationship between star Larry Hagman and the network was deteriorating with Hafgman demanding more salary and critical imput. It's then that CBS decided to have his character of J.R. shot and the last image of the season would show him heavily bandaged.
That way if Hagman balked at resigning CBS could toss in another actor.
I remember I was in L.A. at the time and heard the rumor Robert Culp (I Spy) had been signed as the replacement. I confronted a surprised Culp during an interview session and he denied it. So I stil wonder who the replacement was.
Of course the "Who Shot JR?" episode wemt through the roof and Hagman returned after all. But the mania for cliffhangers was on.
Worst ever cliffhanger was the one on Dynasty with cast members trapped in a collapsing mine shaft with a hidden Nazi art treasure. That was in 1989 and it was a desperate attempt to stay off series execution but it failed.
I have no idea how the cast got out of that one because they all were reunited in a 1991 TV movie sequel.
And good luck to the cliffhangers of 2009. I can only hope they're just as ludicrous --and  just as entertaining.
PICTURE: LINDA GRAY AND LARRY HAGMAN IN DALLAS.
Posted by james bawden at 11:10 PM