Bea Arthur Was Something Else 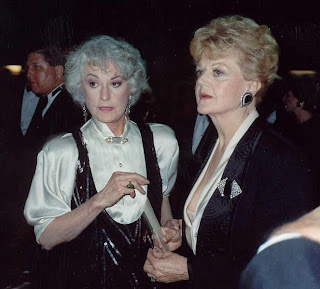 I was saddened but not surprised to hear of the passing of Beatrice Arthur at 86.
The last time I saw her was in her one woman show as she passed through Toronto in 2003 and she seemed somewhat diminished.
Our first meeting was in a freight elevator at CBS Television City in Hollywood --I was there to interview Bill Macy who was about to co-star with the formidable Arthur in the new situation comedy Maude.
"Quite frankly I'm terrified of her," giggled Macy who knew Arthur was standing right behind us.
"That's because I'm taller!" she retorted as she jumped off the lift and rushed into the rehearsal hall.
Arthur later told me she was delighted to "suddenly" be a star at age 50.
It was in 1970 when she was visiting husband director Gee Saks in Hollywood. On a whim she accepted producer Norman Lear's invitation to guest star in an episode of All In The Family playing a very liberal relative of the Bunkers.
The episode tested so strongly CBS offered her a spin off titled Maude. When I visited the set to interview Macy  it was July 1972 and the half hour sitcom had yet to debut (on Sept. 12, 1972).
It proved to be an almost instant hit. Arthur's character, Maude Findlay, had been several times divorced, was currently wed to Walter, an appliance salesman. Also living in the home was Maude's 27-year-old divorced daughter Carol (Adrienne Barbeau) and her nine-year-old son Phillip (Brian Morrison).
And what about Maudie's housekeepers --there were three of them starting with Florida (Esther Rolle), then Mrs. Naugatuck (Hermione Baddeley) and finally Victoria Butterfield (Marlene Warfield).
And let's not forget the next door neighbors : Dr. Arthur Harmon (Conrad Bain) and wife Vivian (Rue McClanahan).
Maude was a feminist., One episode even had her contemplating an abortion (she decided to have the procedure), Then she had a face lift, confronted menopause and Walter battled alcoholism. With ratings drooping in 1978 Lear decided to have Maude run for the U.S. congress but Arthur wisely bowed out with the show still near the top.
I interviewed Arthur on the set of her next sitcom Amanda's --remember that stinker? It ran on ABC for five tortured months in 1983 and was --get this --a remake of Fawlty Towers (although unacknowledged).
Arthur then thought she could rest on her laurels but suddenly Golden Girls was on for a seven year run (1985-92).
Arthur was perfectly cast as Dorothy Zbornak opposite Betty White, Estelle Getty and Rue McClanahan. Arthur always said it succeeded because of the brilliant writing of Susan White but it was mostly Arthur's show. With her deep voice and arched eyebrow she could get a laugh off the most mundane line.
But characteristically it was Arthur who begged off after seven seasons. The rest of the cast soldiered on in the sequel The Golden Palace which only lasted a season.
Richard Kiley who acted opposite Arthur in the 1998 dramatic TV movie My First Love said she was a worrier who was always unsure of herself. Betty White said it was Arthur who had stomach aches just before each week's taping before an audience.
In real life Arthur wasn't formidable but kind and considerate, doting on her two son and helping out dear friends. When the late Brian Linehan came to L.A. to visit he'd stay with her although his immaculate image often proved irksome. She'd joke she would stagger out of bed in the morning and Linehan would already be up wearing his customary blazer.
Arthur came to L.A. with a proud stage career that included huge roles in Fiddler On The Roof and Mame which she repeated in the 1974 movie version.
Way back on live TV days she was seen to advantage in skits starring Canadians Wayne and Shuster on Ed Sullivan's CBS variety hour.
So Bea Arthur really had two big careers. Her later, huge success on TV was richly deserved, the icing on the cake.
PICTURED: ARTHUR AND HER MAME CO-STAR ANGELA LANSBURY.
Posted by james bawden at 11:15 PM

Just discovered the Blogbaw by the artist formerly known as Phantom. How does one contact you without the whole world reading it?