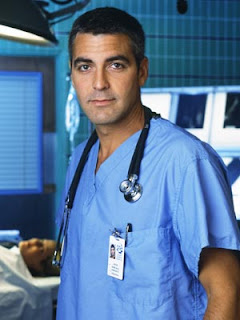 Hard to believe but it was way back in Sept. 1994 that ER premiered on NBC.  It was another TV world back then.  The Big Three U.S. networks dominated our viewing patterns unlike these days when cable TV drama is the big thing.
I remember watching the original ER pilot in a darkened NBC screening room and trooping off to the set in Burbank to meet the largely unknown cast: George Clooney, Noah Wyle, Anthony Edwards, William H. Macy, Vanessa Marquez.
Some only lasted the first season while Clooney who'd bumped around on TV for years suddenly emerged as a big star.
I remember liking the polished pilot and being amazed by the huge standing sets. Production was out at Warner Bros. but nobody could say if this one was going to be a hit.
Why not? Well, CBS  also had a new medical drama Chicago Hope coming on smack dab against ER: Thursdays at 10. And neither NBC nor CBS was going to blink.
A bucket of money was a stake. Thursdays is the most watched night of the week. Whoever won the ratings war that night could rake in big bucks from national advertisers.
NBC already dominated the night with Mad About You, Wings, Seinfeld, Frasier and the departing L.A. Law. The peacock proud network needed a red hot new entry and got it big with ER. With a huge ratings lead-in ER managed to retain and even extend the audience of Seinfeld and Frasier.
The year before CBS had tried but failed to dislodge those pesky NBC sitcoms with In The Heat Of the Night, Connie Chung and Angel Falls (remember that stinker?).
In 1994 CBS brought in fresh troops in the form of Due South (at 8) and Chicago Hope (at 10) but pnce again NBC emerged the big winner.
Within weeks CBS moved Chicago Hope which went to Mondays at 10 and survived six more seasons.
ER was the slightly better show. It had impeccable credentials: Michael Crichton was the creator, John wells the producer. I remember one critical comment: "Iy oozes adrenaline". And it rapidly became a showcase for flashy guest star appearances. Twenty Emmy nominations went to visiting actors although only two won Emmys: Sally Field and Ray Liotta.
And NBC owned Thursday nights and raked in big bucks off its hits for the next decade. When some of its sitcoms fizzled along came Friends, Scrubs and Will & Grace but ER seemed ready to go forever.
But no series lasts, cancellation stalks even the biggest shows. Recent seasons were pretty lame. The storylines were sputtering to a close. I can't tell you the last time I watched a full episode. And NBC no longer owns Thursday nights.
In fact come September NBC will substitute the new Jay Leno show for all its week night dramas at 10 p.m. American network TV is changing. And not for the better.
So  come celebrate Thursday at 10 with ER's last ever episode. Noah Wyle will be there and there are rumors he'll get to end the drama just as his character once started it. Which would be fitting, don't you think?
ER 'S FINALE IS ON THURSDAY NIGHT AT 10 ON NBC.
Posted by james bawden at 10:27 PM