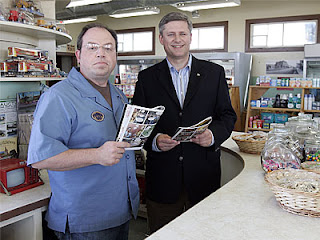 Hard to believe but it's time to bid farewell to Corner Gas, the marvllously funny, quite cute all Canadian sitcom that accomplished the near impossible. It became a bona fide Canadian TV hit.
Let me digress for a moment by mentioning some of the Canadian sitcoms that preceded it, all of which I had to review as TV critic for The Toronto Star: Delilah, Mosquito Lake, Not My Department, Material World, Excuse My French, Learning The Ropes, and Check It Out!
Now you understand where I'm going. It was a long held belief that Canadians simply couldn't make sitcoms. Sure, we were a funny lot --look at all the comics we exported to the States from Jim Carrey to Howie Mandel to Mike Myers.
And, yes, we could do skit comedy better than anybody what with such hits as SCTV, Kids In The Hall, Royal Canadan Air Farce, CODCO and This Hour Has 22 Minutes.
But sitcoms? No way! The last home made sitcom hiy on Canadian TV was The King Of Kensington which expired 29 years ago.
Yes, I know I haven't mentioned CBC's The Newsroom which was a mockumentary or a dramedy but not a sitcom. And besides it never garnered high ratings.
So when Corner Gas came on CTV five seasons back expectations were low. Maybe that's how Brent Butt accomplished such a miracle. His show came in under the radar. But from the very first episode it was a huge hit. The audience average for its five seasons is a hefty 1.7 million viewers.
Butt made all the right decisions . From the beginning he used seasoned comedy talent as writers like Mark Farrell (The Newsroom) , Robert Sheridan, Paul Mather. Butt once told me he always looked forward every year to the story sessions and the way gags would crackle and pop around the writers' table.
He cast actors as leads and not comedians: Eric Peterson (StreetLegal) and Janet Wright were pitch perfect as bickering Oscar and Emma Leroy. Gabrielle Miller was cafe owner Lacey Burrows and Nancy Robertson was retail assistant Wanda Dollard. I can't picture anybody else but Fred Ewaniuk as dim-witted Hank Yarbo. And the police officers were Lorne Cardinal (Davis Quinton) and Tara Spencer-Narin (Karen Petty).
At first Butt was the weakest actor of the bunch but he learned quickly and like Jerry Seinfeld became a consumate sitcom performer. Some stand ups (Jackie Mason, Margaret Cho) never could make that jump.
Shooting on location in Saskatchewan was another plus. Adding Canadian guest stars made a big difference; one could spot the likes of Adrienne Clarkson, Julie Stewart, Lloyd Robertson. and Shirley Douglas.
On Monday's final episode Prime Minister Stephen Harper does the honors (Paul Martin was the first PM to appear).
I did several telephone interviews with Butt who remained throughout this experience very down to earth. He only objected once when I wrote he'd shopped the concept originally to CBC. He protested he had not and I duly made a correction. Turns out he had worked at CBC on concepts but nothing ever went on air. A Brent Butt late night talk show? I can see it now.
Butt was so nice he even stood in a Saskatchewan cornfield with the fall TV preview of Starweek in his hand. It made for Starweek's best ever cover and people still talk about it. One elderly gentleman phoned up to protest:"Tell him he can get sunstroke reading The Star in that field. Why doesn't he seek shade?"
Ending after five seasons and 107 episodes was Butt's idea and a good one. Stopping while you're ahead --if it was good enough for Mary Tyler Moore than it's good enough for Brent Butt. But CTV's head office must have had coniptions --Corner Gas is proud proof Canadians will watch Canadian TV if it's good enough. CTV will have real troubles replacing it.
Butt still has a sturdy stand up-career and there are stories he's fashioning a new TV pilot for wife Nancy Robertson. She's the only Corner Gas star I've interviewed in person and she was sweet and modest, instantly likable and totally unlike her Wanda  character.
Maybe with the passage of time there'll be a Corner Gas  reunion movie. But until then there are the DVD collections. Few Canadian series get a DVD release but Corner Gas on DVD deservedly became a best seller.
Monday on CTV is being treated as a day of Corner Gas celebrations with the cast live from the Masonic Temple on Canada AM at 8 a.m. Then E!Talk has a salute at 7 p.m. on CTV and there's a behind the scenes special at 7:30 p.m. The title of the last episode is "Good Night, You've Been Great."
THE FINAL EPISODE IS ON MONDAY APRIL 13 AT 9:30 P.M. ON CTV.
Posted by james bawden at 10:14 PM