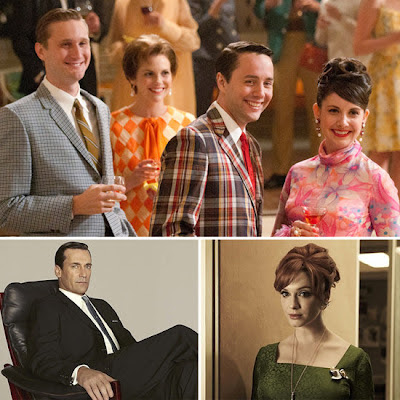 Think of it --the two best American TV series Mad Men and Breaking Bad--and neither is on Canadian TV.
And that's deliberate I do believe.
Instead we're inundated with terrible U.S. reality shows, mediocre dramas, sitcoms that last but a few weeks.
But all are simulcasted so the Canadian network can black out the incoming U.S. signals and substitute the Canadian one --the one with Canadian commercials.
Such is the sad state of Canadian television these days.
Because Mad Men and Breaking Bad run on the little seen AMC network which runs as an extra cost channel in Canada there's been no sale of either show to any network up here for years.
Mad Men finally made it back Sunday night on AMC after a 17-month hiatus.
The first two hours were not up to expectations.
There's been so much hype it was with a feeling of letdown that the first new episode ran.
It was mostly a house keeping episode although the complete absence of January Jones's pivotal character of Betty Draper wasn't even explained.
The date has been fast forwarded to May, 1966, and the more the series segues away from the Fifties the darker it gets.By 1966 the war in Vietnam is heating up and the race situation has the U.S. facing riots in the big cities.
In fact, the Civil Rights movement erupts right outside the windows of Sterling Cooper Draper Pryce.
Don (Jon Hamm) and Megan (Jessica Pare) have married and we instantly know it's a case of the newley weds not really knowing each other.
Pete (Vincent Kartheiser) and wife Trudy have moved to the burbs and have a new baby.
Also with a newborn is Joan (Christina Hendricks) --remember her medical husband is off in Vietnam and the real father is Roger Sterling (John Slattery).
Pare really strutted herself in the pivotal scene where she throws a 40th birthday party for Don and gets her head chewed off because he hates the idea.
It's a chance for Peggy (Elizabeth Moss) to get drunk and lament the amount of work she's been doing to make Heinz beans.
At the conclusion it's painfully apparent this new couple really have nothing in common outside of vigorous sex. One again Don Draper has failed to understand himself or the people near him.
I just think all the participants --writers and actors --were off their game. Perhaps they were rusty after such a long vacation.
Peggy's pitch to Heinz had some spark. Pare's sexy dance at the party was oo-la-la, je pense. Joan's newfound motherhood found her bored and distracted and with an old fashioned mother who disapproves of her returning to work at all.
That was a very strange scene where Joan brought her baby to work and at one point left him with Peggy and Pete --who had a child that was placed out for adoption, remember?
But the whole two-hour thing was lacking in the rich ironies we've come to expect.
It was framed by the ordeal of blacks at the time --at the end the reception room is flooded with blacks who've heard SCDP masy be easing its restrictive hiring practices.
Hopefully by next week MM can bounce back to being provocative, ironical and occasionally funny. The rhythm of the show remains way off but that's understandable.
But admit it, wouldn't you rather be seeing Mad Men on Canadian TV than the latest Kardashian reality thing or a forgettable American copy cat procedural show?
Posted by james bawden at 11:42 PM