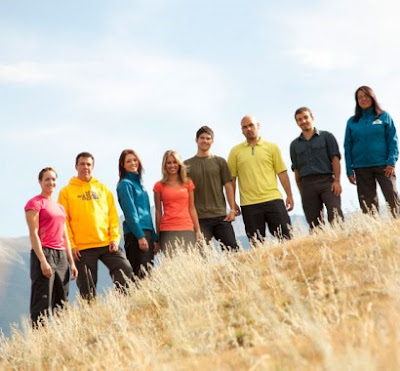 There was another new series debuting the same night as the Canadian reality series Operation Unplugged.
So I watched it and didn't give OU a chance.
Call it my natural antipathy to Reality TV. But that's not the way at all to cover the TV beat however crowded the schedule becomes.
Oh, I started hearing about it from readers of this column and friends.
So I finally relented and watched the DVD preview and I'm liking what I saw.
I like this one because it's so relentlessly Canadian. The eight participants are all Canadian and so are the venues.
And we get to learn life lessons about what it means to be a Canadian.
What's there not to dislike about this one I ask you.
Th host is understated adventurer Alan Bishop and his tests for the eight will take us through some of the magnificent national parks of Canada.
The collection of contestants also has a strangely humorous aspect as many are modern techology fanatics who worry what their lives will be like without constant tweeting and texting.
They form a nicely ecclectic mixture of personality types: balded Kammer Kinnarath, 27, who calls himself a gadget dude. Described as "wedded to the web" is Jillian Storey, 20.
Scott Simons, 19, is a compulsive gamer while Alana Obey , 30, is a text fanatic but also dead scare of the water.
Vanessa Pampalon, 21, is a social network diva and Daniel Paluzzi, 21, is a smartphone slave.
Catherine Lebel, 26, is described as lost in cyber space while the oldest Chris Miekle, 42, is described as a digitally distracted dad.
The premiere found the gang at Nova Scotia's overpoweringly beautiful Kejimkujik National Park and a journey back into time to the early 1800s when British soldiers from the Citadel in Halifax would sojourn here to hunt and fish.
Two such tourists are provided and the eight must treat them as any gentlemen of the period would be treated --by building tents, paddling the canoes around for transportation, even making them teas and dinners the tourists would demand --and all without any modern accoutrements.
Watching them try to build a tent from scratch or saw a log is fun of a special kind. But it also reminds us what kind of wilderness once completely dominated the Canadian landscape.
On this week's episode on Tuesday March 6 they venture into Saguenay-St. Lawrence Marine Park in Quebec for a series of water based adventures.
Next week they're in Bruce Peninsula National Park and on March 20 are in Saskatchewan's Motherwell Homestead National Historic Site.
I happily admot I was wrong prejudging this one and I promise to watch every week from now on.
And you should do the same.
OPERATION UNPLUGGED RUNS ON T+E (TRAVEL + ESCAPE) ON TUESDAYS AT 9.
MY RATING: ***1/2.
Posted by james bawden at 5:13 PM

Awesome show!!!! i love all the parks.

Thanks for a wonderful review James. It is such a pleasure to have the opportunity to show Canadians this amazing country of ours and the one of a kind journey our fantastic cast members took. The episodes get better and better as the show progresses.