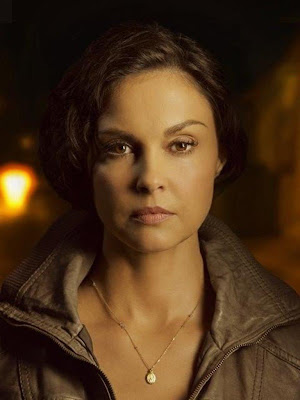 Wow --it really was a whole back when I was on the set of the ABC series Sisters and watched newcomer Ashley Judd do a scene. Like 1991 I'm figuring.
Now Judd is slated to make her TV series comeback in Missing an action-jammed effort that plays like a snappy sequel to Lost.
Only this time Jack Bauer is played by Judd's tenacious character Becca Winstone.
And she's kicking some serious butt.
If one believes the ABC press package Judd does all her own stunts which includes a lot of running up and down the cobbled streets of Rome, getting tossed, thrown and stabbed at by various revolutionaries and reacting in kind by stomping, tossing and cracking as many bones as she can find.
In the first episode I counted five or six possible cliffhangers and I'd like to warn ABC to treat their star with a little more compassion or she'll be in traction for many months to come.
In short she is a Jack Bauer for our times.
In the first episode we watch as a slightly fraught Becca waves good bye to her only son who is off to Italy to study. But she seems more upsety than the ordinary mother would be. Is she hiding something?
That's because Becca is no ordinary housewife.
She's a former ace CIA agent who has deep connections with this organization all around the world. And when she doesn't get the information needed she jets over to take care of the deteriorating situation herself.
Most U.S. series are shot on back lots either in the U.S. or Canada.
Missing goes on actual locations --mostly European --every week meaning the costs are sky high but the authenticity is in every shot.
As Becca investigates she finds her son's rooms, his half eaten breakfast and begins the first of her "Perils of Pauline" escapes from a hired assassin.
By the way the first cliff hanger that ends the first episode is a basut. And I can't possibly reveal it here.
Written by Gregory Porier, directed by Steve Shill, the hour whistles by. A lot of information is given out that may be useful later on: turns out both Becca and her dead husband (Sean Bean) were CIA types --but is thehusband really dead? Or will Bean keep appearing only in flashbacks?
Cliff Curtis as CIA head of European operations is right properly skeptical that Becca has been a stay-at-home home for the past decade --after all she's been training to be in peak physical shape. But for what?
To get Judd on board ABC agreed to shoot only 10 episodes the first season and no more than 13 if a second season is ordered. Each hour will be set in a different European city as more aspects of Becca's life are revealed.
But once she finds her son will the series be over? How long can she go on searching without TV viewers losing interest?
But ABC bought the series based on the first script and without the usual pilot.
Subsequenr hours have to include more "down" time. Wartching the first made me feel exhausted.
We'll have to see how the next few episodes unfold before knowing of the series' fate. And top production values of the first hour will be difficult to replicate every week.
MISSING PREMIERES ON CTV AND ABC THURSD. MARCH 15 AT 8 P.M.
MY RATING: ****.
Posted by james bawden at 10:27 PM

This is an excellent series and I look forward to each new episode. It is very well cast and the locations are great Hope it continues for a long time as there is next-to-nothing worth watching these days.

waiting on the 11 episode