Am I Ready To Re-Board The Titanic? 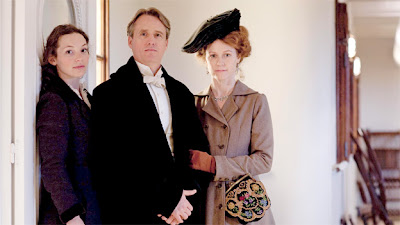 Just what is so special about the Titanic whose sinking 100 years ago spawned a veritable industry of books, movies and now an epic TV miniseries?
I mean how many films about the Lusitania's sinking have you ever seen? I rest my case.
That's why I hesitated about popping in Global TV's preview DVD of Titanic, the latest version of the disaster but one with a real pedigree: it was written by Downton Abbey creator Julian Fellowes.
And I watched the first two hours (of four) quite contentedly because of the spin Fellows has put on the events.
He re-sees the actuality through the prism of a social historian, pointing out to us how class conscious British society was in 1912 and how so many of the first class
Don't forget that the first episode of Fellowe's Downton Abbey opened wuth a description of the sinking of the Titanic so it's a subject which already fascinated the writer. passengers survived compared to the folks in Second Class.
His portrait of society in Belfast in 1912 is etched in acid --here religious intolerance meant few fully qualified Catholic tradesmen were allowed to work on the fittings and one master electrician only did it so that he could book steerage for his family and escape to a New World hopefully free of such prejudice.
But Titanic like The Borgias is also a Canadian co-production meaning much of the postproduction was done here and a few Canadian actors (Linda Kash, Noah Reid, David Eisner) are also onboard that fateful night.
The main sets including most of the ship's interiors were constructed on Budapest sound stages and the recreation of that era is lavish and completely believable. It looks far more expensive than any other recent TV miniseries.
And a fine bunch of mainly British actors headline this production.
Linus Roache is a fictional Lord Monton whose philandering ways are well known by his Anglo-Irish wife (Geraldine Somerville).
Steve Waddington is second Officer Lightroller. James Wilby is the White star executive Bruce Ismay who pointedly would not go down with the ship. Sylvestra Le Touzel is Mrs. Duff Gordon. David Calder is Captain Smith.
I watched the first two episodes so far and was constantly amazed at the high quality of this production but I disagree with Fellowes' decision to show the disaster from the different perspectives of various people on board. To me by the second episode it becomes slightly anti-climactic.
Also, all the people on board should be real people and not fictional as is the case with Roache's character.
Points are made from the beginning that the final work on Titanic was rushed and perhaps even substandard and may have not been up to scratch. And the way the various classes of passengers were treated was indeed a microcosm of British society at the time.
Besides this Titanic James Cameron's massive movie version is getting a relaunch in 3-D --I felt the hokey fictional romance was entirely inappropriate.
And beginning on April 9 National Geographic Channel recognizes the centenary with the documentary Titanic: The Final Word with James Cameron followed on April 10 with a revolutionary new theory Titanic: Case Closed.
And on Sunday April 15 History Television presents Nazi Titanic about the making of the 1942 Nazi propaganda film all about the sinking commissioned by propaganda minister Joseph Goebbels.
Got all that?
TITANIC PREMIERES ON GLOBAL TV ON WED. MARCH 21 AT 10 P.M.
MY RATING: ***1/2.
Posted by james bawden at 1:09 AM