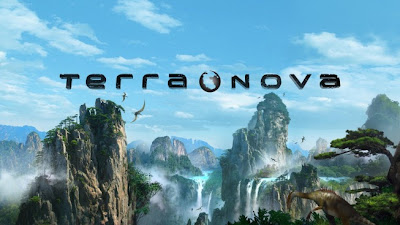 Almost all the hugely hyped new TV series of the season are getting mowed down one by one.
The latest to get bumped off is Fox TV's Terra Nova.
Ratings were unspectacular and the huge costs of the show forced Fox to cancel after just one disappointing half season.
This was the show where the dinosaurs were the best actors while the humans were just cliched types.
Good for the actual studio 20th Century Fox in saying the series will be shopped to other networks.
It's too expensive for cable networks but what about a possible pay TV window?
To be truthful the show was a muddled mess from the beginning opening strongly and then wasting all its dramatic points. It fared much the same as The River. Too much dough was spent on the look of the show and not enough on getting viable scripts.
The two-hour finale tried to reverse all of that and was the only satisfying chapter and based on that Fox had to ponder whether the show was worth saving or not.
Fox has just cancelled its Monday night series of eight great years House. And another Monday night show Alcatraz which started off so strongly has been dripping away in the ratings ever since.
I'm among those viewers who think Terra Nova could have been saved early on. It was too clearly aimed at younger kids with nothing much offered to the all important tween and teen markets.
The plot inconsistencies certainly disturbed the nerd niche market --they never got attached to this one as they should have. It has also been said there was little to get really frightened about.
Characterization was certainly poor --this family was a cardboard creation.
And, yes, it's strange but some buffs thought the effects cheezy.
I interviewed star Jason O'Mara when he was starring in another series that never made it (InJustice). Why wasn't he better promoted and should not his character have been front and center throughout?
Anyway Terra Nova is now history.
And look for pink slips to soon be delivered to the likes of Pan Am with veteran shows Cougar Town, Parenthood and even Fringe facing the ratings hammer.
Posted by james bawden at 2:38 PM