The Age Of Anxiety Looks At Our Pill Popping Culture 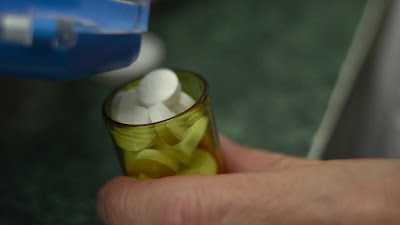 I grew less anxious when I discovered Ric Esther Bienstock is the producer of the challenging new documentary The Age Of Anxiety. It's on CBC-TV's Doc Zone Thursday night at 9.
The Emmy Award winner has this knack of taking a difficult and diffuse topic like today's anxiety related culture and making us understand some of the key debating points.
And being able to accomplish all this in something like 45 minutes.
She's taken a topic all of us are wondering about as we go about our business: whether we have become a nation of pill poppers and if indeed we need all that medication in the first place.
I'd suggest a rash of celebrity deaths due to prescribed medications has a lot of people on edge. Bienstock choses her subjects wisely: a concerned New York city mom stressed out by living and working in the capital of high anxiety, a female college student stressed out as exams loom on the horizon, a guy at a computer who wonders if any other past society ever experienced such high levels of stress.
And Bienstock has gone out and garnered a rafter of leading experts. But her editing skills are so smooth we forget for awhile that what we're watching is the inevitable parade of talking heads.
One indicator such a film is timely comes with the announcement that in 2013 a new edition of Diagnostic And Statistical Manual Of Mental Disorders (DSM) is coming out a full year behind schedule. What will it list as disorders? Apathy syndrome? Parental alienation? Internal addiction?
At one New York party Bienstock captures a group of chic and trendy couples all completely familiar with the language of psychological distress and eager to discover which disorders they may possess.
And Bienstock also goes after the smooth and sophisticated campaigns by PR firms designed to entice susceptible TV audiences into thinking that they need the next wonder drug. How Plaxil was marejeted is an astonishing case study of producing a market for something new.
The experts summoned forth include Patricia Pearson whose book A Brief History Of Anxiety was the jumping off point for the film, University of Toronto medical historian Edward Shorter, renowned David Kupfer, chair of the DSM task force, Harvard University's Arthur Kleinman, Daniel Carlat who wrote Unhinged and Allen Frances who chaired the last DSM task force.
And Bienstock manages to get a lot of information out of them without seeming to over load viewers with too much fancy details, an admirable feat in itself.
Scott Harper wrote and directed it for Associated Producers and the way it is made ensures a wide audience outside of Canadian TV.
THE AGE OF ANXIETY PREMIERES ON CBC-TV ON THURSD. MARCH 15 AT 9 P,M. WITH A SECOND SHOWING ON CBC NEWS NET FRID. MARCH 16 AT 10 P.M.
Posted by james bawden at 5:05 PM