Can Kiefer Sutherland Turn Touch Into A Hit 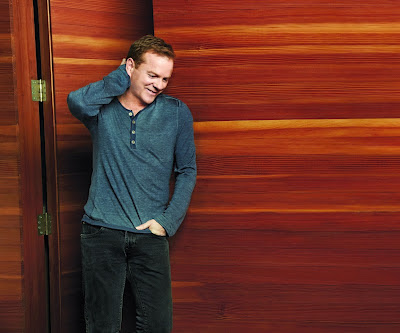 I'm not discounting Kiefer Sutherland's considerable acting skills--after all I first met him when he made his groundbreaking Canadian feature Bay Boy way back in 1984.
But I was totally taken with his new series, Touch, when it had a one episode 67-minute run in January followed by a complete half season tonight at 9 on Global TV and Fox TV.
I mean it's totally different from the frenetically paced 24 which made Sutherland such a huge TV force.
But I'm not sure where Touch can go and that's the problem.
Sutherland stars as Martin Bohm, a guy from New York whose wife perished during 9/11 leaving him along to look after a son Jake (David Mazouz) who is 11 but had never talked. Plus the boy cannot stand to be touched.
Part of my problem with the series lies with its brilliant creator Tim Kring who created the marvelous series Heroes which had a brilliant first year and then tanked.
Torch is about ordinary people behaving extraordinarily. Which is fine but how will that work week after week.
And I'm worrying the same thing might happen with Touch as happened to Heroes.
The concept is very ambitious. And Sutherland is so completely different from Bauer it seems at first glance we're watching a different actor.
I'm sure Sutherland with his clout must have demanded Kring stick with the series until all its considerable kinks get ironed out.
I'm not going to ruin the story for you except to say it expects a lot out of the TV viewer. but can an ambitious show make it in today's lowest common denominator market? Stay tuned.
First of all viewers have got to let go of 24 and all that implied. Evidently Sutherland himself cannot let go because he's going to make a movie version during his hiatus.
Look, I've known a lot of TV stars who told me they returned to TV too soon after their first big effort.
In between Father Knows Best and Marcus Welby Robert Young was in the flop Window On Main Street which he told me he thought was his best ever effort. And in between Our Miss Brooks and The Mothers In Law Arden made her favorite one The Eve Arden Show which lasted half a season.
Later on John Ritter had the same problem with Hooperman after his monster hit Three's Company typecast him in goofy comedy. And Bonanza's Lorne Greene could never escape from the Ponderosa through such flops as Griff and Battlestar Galactica.
So Sutherland's hunt for a new show may be premature.
It's like viewers still think of Sutherland as a commanding action oriented guy named Jack Bauer and with the reruns and boxed DVD sets that means type casting at least for a few more seasons.
Look, I want you to give Touch a chance. Over several weeks at least. It's the kind of quality drama we rarely see on the main networks these days.
TOUCH IS ON GLOBAL AND FOX THURSD. MARCH 24 AT 9 P.M.
MY RATING: 8881/2.
Posted by james bawden at 10:28 PM