My Extreme Animal Phobia Scares Me 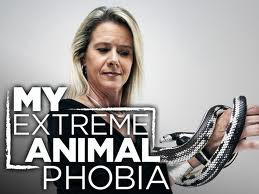 My Extreme Animal Phobia premiered on U.S. TV back in October.
It's a six-part hour long series that every week takes patients on a week long journey into confronting their innermost fears. about animals they've encountered.
On the first hour four people are profiled.
There's Tom, 40, who has been terrified of rodents every since he was a young boy.
He's so paranoid he has his young kids open the garbage can before he tosses out the garbage --who knows there might be a rat lurking just under the lid.
Then there's pert and sassy Jackie who is deathly frightened of dogs, any dog. She won't even visit her best friend's house because dogs also live there.
Cameron, 21, desperately wants to move to New York city but there's a problem --the mere sight of a pigeon causes him to scatter.
And then there's 60-years-young ()()()( who has this phobia about snakes. She won't take her shoes off out of doors and dreams about snakes slithering up and out of the faucet when she's taking a bath.
They all need help or rather tough love. And they get it in abrasive doses from Dr. Robin Zasio who explains that these phobias result from chemical imbalances in the brain. There's no way getting around these fears except by directly confronting them.
For Tom it involves tossing a bucket of dead rodents into the animal cages at the zoo.
For Jackie it's getting closer and closer to man's best friend.
To Cameron it involves putting his hand in a cage and petting a pigeon.
For Ramona, 61, it involves going back to her room and finding it filled with stuffed snakes and not getting freaked out.
Usually I'm no big fan of Realty TV which I firmly believe is mostly made up.
But these four people are not acting for the cameras, I believe. To the contrary they all want to get up and run for hell.
What keeps them on camera is Dr. Zasio's insistence they stick it out or they'll never be free of their phobias. And they've lived with this problem for ever so long.
Cameron must venture inside a pigeon feeding pavillion where thousands of birds live and he must fill the troughs with food and water as they fly all about him.
And he finds the birds are basically harmless and only interested in getting their next meal.
Ramona must sit in her bath tub and allow Dr. Zasio to bring in a 10-foot yellow python and hold on to it while the good doctor exits.
And she finds the snake harmless and probably just as scared as she is.
Jackie learns to hold dogs on leashes in the park and not be frightened.
And Tom is confronted by the reality of 50 mice and rats let loose in his room --all of which he must pick up and place in cages.
There are lessons to be learned here for all of us. But I'm not sure who I was rooting for sometimes --the terrified humans or the beleagured animals.
When last glimpsed Cameron is sitting with his parents in a park in New York city feeding --you guessed it pigeons.
And please alert me if slippery, furry spiders are ever showcased. I'm so afraid of them you see.
MY EXTREME ANIMAL PHOBIA PREMIERES ON ANIMAL PLANET ON THURSD. MARCH 15 AT 8 P.M.
MY RATING: ***.
Posted by james bawden at 11:31 PM