See I told You: Rosie Is Toast 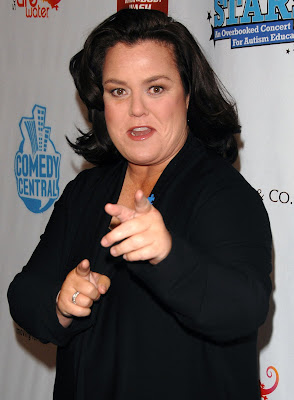 I warned you months ago that Rosie O'Donnell's new talk show was a bust.
The new show went through various format changes, one sign it might be headed to a quick demise.
And it didn't help that the show was running on Oprah's new network OWN. I can't find many people who admit to ever watching OWN even when Oprah is on.
Why Rosie ever left her morning talk show syndicated by Warners beats me.
She had phenomenal ratings, big guests like Tom Cruise and huge ratings.
but she did leave and then came that controversial stint on The View where she sometimes bucked the authority of its octogenarian host Barbara Walters.
And nobody talks back to Barbara and survives sitting next to her.
Rosie went from that show amid a blaze of publicity--didn't Barbara once refer to Rosie as "my problem child"?
Well, Rosie added sparks to that show rarely evident on The View these days.
With her stint for Oprah (another powerful woman who must be obeyed) Rosie started off saying she wouldn't be doing a celebrity thing where stars come on to promote various products.
And she didn't. Trouble was she couldn't find a suitable format replacement.
Some of the shows I found interesting --like a two parter over a breakfast table as she traded anecdotes with fellow stand up queen Kathy Griffin.
Another big night was a one-on-one with struggling comedienne Brett Butler who answered every question by turning to the audience and talking quickly.
The last figures I saw had Rosie averaging 190,000 viewers. For the entire U.S.A. Which is catastrophic even for a struggling new cable weblet.
Of course Oprah immediately texted: "I thank Rosie for joining me on this journey." Which is so Oprahesque. What journey?
Heck, it was a talk show that flopped.
Actually I felt the show was slowly getting better. The silly game show part was dropped. The audience was pared down to 70 hearty souls for a more intimate look. And also it was cheaper to produce.
Rosie says she's going back to her New York roots but what can she do next? She's tough talking, very smart --is there no platform for her on TV?
Perhaps as late night's first female standup comedy host? Or as Barbara Walter's ultimate replacement on The View --but that might happen years from now.
Posted by james bawden at 10:00 PM