Winners And Losers Of The New TV Season 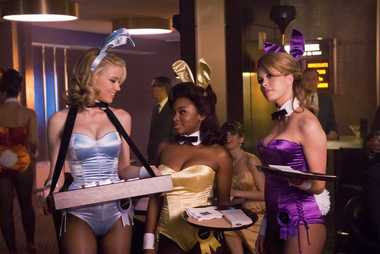 It had to happen. The first casualty of the new fall TV season is --The Playboy Club.
It had to go not merely because it was a terrible show.
Viewers just were not interested in this type of jiggle TV.
So NBC says it will plop in reruns of faltering Prime Suspect until a new series called Rock Center with Brian Williams can begin at the end of the month.
BUT NBC says it will also give full season orders to two somewhat faltering sitcoms: Up All Night starring Christina Applegate and Will Arnett and Whitney Cummings show called Whitney.
Whitney has been a terrible disappointment but NBC simply doesn't have anything else available.
And what new American shows are hits so far?
Well, CBS's Two Broke Girls hit Number 4 in the Top 20 ratings list its first time out but that was because it followed the audience blockbuster Two And A Half Men Mondays at 9.
CBS's Unforgettable tied with another CBS staple Criminal Minds for 12th spot.
CBS's Person Of Interest was number 15.
The X Factor's two showings were tied for 18th spot on Fox --this despite press reports the show had bombed. It didn't but it never garnered anticipated numbers.
And ABC's Pan Am was a sturdy 24th.
NBC's only entry, old or new, was perennial Sunday night favorite.
Conclusion: TV viewers dialed back to tried and true favorites as they almost always do.
Posted by james bawden at 12:01 AM