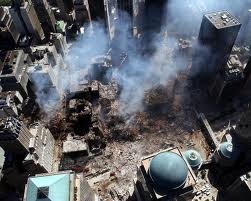 If I were a sceptic I'd think there might be a link between the Wall Street protests and the new TV documentary Conspiracy Rising.
But that would make me a conspiracy advocate, one of many profiled in this must see new CBC program directed and produced by veteran Andrew Blicq for Merit Motion Pictures.
The polls tell us that many of us concoct conspiracies to explain those distressing aspects of this modern age.
I can remember as a high school student being in the middle of a Grade 12 Latin examination when the whisper went around the auditorium that President John Kennedy had been assassinated in Dallas.
Then there were the strange, unexplained circumstances surrounding the car crash and death of Princess Diana in 2008.
And let's not forget 9/11. Around 1 p.m. that fateful day I looked out the gigantic front windows at the Toronto Star and saw the sky filled with American jets circling over Lake Ontario --The World Trade Center had been bombed and all planes in American air space diverted to Canada.
Did I concoct any theories about these unusual events?
Well, I have never believed the lone gunman theory at Dallas. And neither did ex-prime minister John Diefenbaker the one time I interviewed him.
So Conspiracy Rising was made for me. And anybody else suspicious about events in recent modern history.
It's remarkably well put together, mixing archival footage we've come to know (and hate) plus comments from talking heads explaining all this phenomena.
It reminds me a bit of a book I read in my American history course at university: Richard Hofstadter's The Paranoia In American Politics.
Because nineteenth century conspiratorialists tried to explain that John Wilkes Booth hadn't assassinated President Lincoln --and it wasn't Booth's body burned in that barn.
The Kennedy assassination continues to fascinate. A recent new story said widow Jacqueline Kennedy suspected vice president Lyndon Johnson had arranged the killing with Mafia support.
The lone gunman theory was dissected years after the fact by CBS's Walter Cronkite who tested rifles at the site of the Texas School Book Depository and wasn't satisfied a poor shot like Lee Harvey Oswald could have done the deed.
But Blicq goes to the site and finds tourists saying it was anywhere from two to nine shooters participating.
It's so much easier to think Princess Diana was killed by the royal family than the simple explanation someone so gifted and wealthy could fall victim to a drunken driver.
I think the best shots are at the alien museum at Roswell, New Mexico, where the supposed autopsy of an alien who had crashed in the desert is discussed at length --the curator's father was the doctor who did the procedure.
There's even an interview with newly weds who got married and then hurried to the site to spend a night searching the stars for answers. they got none.
The authorities who soothingly explain away most of our fears include human rights activist Chip Berlet, Dr. Patrick Leman, Prof. David Livingstone Smith and Dr. Michael Shermer. All of them are expert at what they do.
But I still have this clump of uncertainty at the back of my brain. Not to worry, I'm told we're all genetically programmed to believe what others keep insisting is the truth.
And I'm not alone.
Conspiracy Rising tells us 16 per cent of Canadians believe the American government had some hand in the 9/11 attacks. And 70 per cent of Americans think Lee Harvey Oswald was part of a larger conspiracy. And a fifth of Canadians believe aliens have visited our planet.
You'll watch CR because it is so well put together.
Will you believe what's said or simply revert to dark theories about the great events of our time?
Maybe my theories have changed after exposure to this hour. Then again maybe not.
CONSPIRACY RISING DEBUTS ON CBC-TV'S DOC ZONE ON THURSD. OCT. 20 AT 9 P.M.
MY RATING: *** 1/2.
Posted by james bawden at 1:59 AM