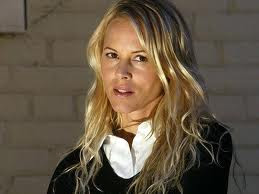 "The Bottom Line" --it's an expression American TV programmers use to describe the ratings depths most new series must go before bottoming out.
Well, CBS is saying its new series Person Of Interest improved Thursday night for the first time since it debuted.
That means it has found its bottom and may now indeed bounce back. The improvement was only a tenth of a percent but any improvement is positive.
On Thursday Charlie's Angels also went up a tenth of a point staving off rumors of imminent cancellation.
But ABC sources are saying that may have been due to the guest appearance of Erica Durance. Insiders are saying ABC may indeed wait a few more weeks to decide the fate of this one.
Then there's the sad case of Prime Suspect which simply cannot escape the long shadow of Helen Mirren in the original.
As a vote of confidence NBC has announced a pick up order for six new scripts. I watched the latest Thursday night episode and I'm saying the format is growing on me.
But ratings actually hit a new low and this despite the repeats running on Mondays.
What's working Thursdays? The old reliables. For CBS that means Big Bang Theory and The Mentalist. ABC's Grey's Anatomy is up 10 per cent giving Private Practice a huge lead in --PP is up 14 per cent.
And The Vampire Diaries on CW is up so much it now routinely beats Prime Suspect and Charlie's Angels on the major networks.
So far the biggest new hit is Fox's New Girl which will be off for baseball playoffs.
the X Factor is a big disappointment. Have North American viewers had enough of Simon Cowell?
Terra Nova has a pretty good ratings number but it's the most expensive show out there at $4 million an episode and Fox says it will only run 13 weeks until the inevitable December cancellation.
Pan Am will probably survive for a full season but ratings keep trickling away. This one is one of the biggest busts of the year considering all the hype.
But Up All Night and Whitney have full season pick ups.
Cancelled stinkers so far include How To Be A Gentleman (CBS), Playboy Club (NBC), Free Agents (NBC).
What new show will be next?
Posted by james bawden at 2:30 PM

It's nice to finally see a TV critic take notice of Durance. She was terrific during her most recent three or four years on Smallville.