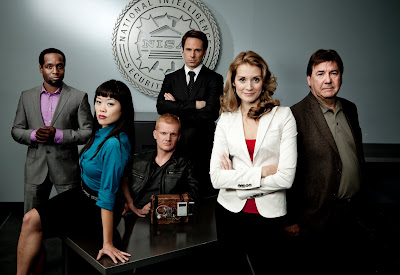 Surprise! CBC's situation comedy InSecurity is returning for a second season.
And chatting with creator and show runner Kevin White he says wasn't concerned for a minute the show might not be picked up.
"We all saw a lot of potential," White says. "And there's a lot of fine tuning that has taken place. It's a very different kind of comedy this time out. The plots are more organized. And it's funnier.
"This new season there's more concentration on office work and that kind of atmosphere and less on how bumbling the team can be out on assignment."
In fact the badinage at times in the first new episode which I've sneak previewed makes it seem these bungling spooks would be right at home working at Dunder Mifflin.
White agrees with me the first batch of 13 episodes was often a tad disorganized and rough around the edges.
The sitcom is shot in Regina (for economic reasons) although set in Ottawa and two episodes are block shot every eight days.
The rhythm just wasn't there the first time out but the new batch seem smoother and better modulated.
CBC is desperately seeking a ratings strong successor to Little Mosque On The Prairie which has been wilting away and surely won't be back next season.
CTV is just as desperate for a new hit to replace Corner Gas. Dan For Mayor was obviously not that show (White worked on that one too) and has already been cancelled.
That still leaves hiccups --the decision is still out.
InSecurity isn't the only sitcom to ever get retooled in its sophomore outing.
The same thing saved Seinfeld and Parks And Recreation.
It's clear that the workplace is going to be the real field of conflict. InSecurity has a huge, high tech wokrk place --the set was kept up in Regina on the chance CBC would order another batch. But the order was scaled back to 10 new half hours because of budget constraints.
Also, the focus has been switched so that blonde and beautiful Natalie Lisinska is solidly front and center as the headstrong but slightly daffy head Alex Cranston.
"All of them are more competent and focused on the drudgery of office politics," explains White. "I mean now the actors know each other and they can interact better, they're more at ease."
Returning characters include the director Peter McNeill (played by William deVry of The Bold And The Beautiful), veteran agent Claude Lesage (Remy Girard), team player Burt Wilson (Mathew MacFadzean), forensic specialist Grace Lynn Kung (Grace Lynn Kung from Being Erica)and unpredictable agent Benjamin N'udu (Richard Yearwood).
CBC notes say while the first season played like a CSI parody in the second batch branch out and we'll get to know more about the office romances, the bad clothes some wear and the mistakes common to any disorganized office.
In the first new episode Burt flunks a lie detector test because he's concealing an office romance and Claude comes dressed up in Seventies duds to show he's with it. The best stuff. however, happens out of the office as Alex faces off against an iffy Russian double agent beautifully played by ()()()()().
"On Corner Gas we had an instant winner, it just all came together," says White. He worked on that one as well. "There's no formula. Except maybe hard work and luck. It rarely happens that easily."
Indeed many hit U.S. sitcoms go through multiple pilots before hitting the air, an option that's too expensive for Canadian TV.--InSecurity had two pilots however.
"We had tons of good ingredients the first season. We're going where the show leads us. It's evolving and it is getting consistently better.
"Bringing in personal details from Alex's life --some friends and relations --that will help. It's a very tough atmosphere to launch a new show. But Ron James did it. We have a second chance and we're taking full advantage."
And
0 forgot to ask if the set is staying up in anticipation of Season Number Three.
THE SECOND SEASON OF INSECURITY PREMIERES ON CBC-TV MONd. OCT. 3 AT 8:30 P.M.
MY RATING: ***.
Posted by james bawden at 10:29 PM

Hopefully the ratings will give this series years more. However, I adored Season One and hope the changes truly are for the better. The actors are superb and the comedy never failed to have my husband and I rolling with laughter. After seeing a clip posted by a guest star, we found ways to watch online (we live in Texas) and have seen every ep at least 2 or 3 time and several half a dozen times. Wish it were possible for U.S. fans to actually just buy from iTunes--maybe a DVD release of Season One is in the offing? Would love to see it crystal clear on my big TV rather than a computer screen.