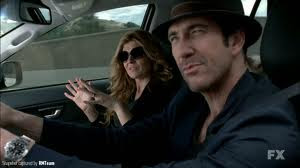 You can tell from the opening credits of American Horror Story that this new series on FX Canada is going to creep you out.
The Credits open with a montage of creepy stills and bloodied surgical instruments. And it's all been created by Ryan Murphy who last gave us Glee!
But American Horror Story has but one purpose: to scare the viewer half to death.
It also helps to know your horror movies and TV series from the past.
At one point in the basement of this old dark house I swear I heard snatches of Bernard Herrmann's score from Psycho.
As a salute to the best of the past it helps that you've seen Bettlejuice, A Nightmare On Elm Street, Rosemary;s Baby, The Shining and about a dozen other classics.
First up there's the old dark house which psychiatrist Ben Harmon (Dylan McDermott), wife Vivien (Connie Britton) and their daughter Violent (Taissa Fermiga) have moved into in Los Angeles after a move from Boston.
The mansion doesn't look Southern Californian at all but has been lovingly restored from its Victorian splendor.
As in all these stories the family doesn't realize at first the mansion is haunted and has been the site of several grisly murders over the decades.
Next door resides a deliciously evil dumb blonde Constance portrayed in high style by Jessica Lange.
And Ben meets the horriblf burned Chad (Zachary Quinto) who once lived in the house before torching it and killing his wife and daughters. Frances Controy from Six Feet Under plays a strange housekeeper Moira who is attached to the home.
Shot on location in an actual old home in Country Club Park, Los Angeles, the house quickly emerges as the most interesting character of all. Some scenes are filmed at Fox on sets which are exact replica's of the rooms in the house.
Murphy's style has always been to overdo almost everything and here he succeeds. In the horror genre less is considered more --the less you see and know the more creeped out you're going to be.
But on AHS it's all scary scenes without the necessary down moments for the viewers to recuperate.
There's a lot of nudity, blood letting, screaming --you name it.
Jessica Lange understands she must play everything at full throttle to disguise her character's true intentions and she is obviously having a ball. And one line she has in the opener made me sit up straight when she warns the maid: "Don't make me kill you again."
The maid is sometimes Frances Conroy but she morphs into a sexy, young thing when Ben is eyeing her.
But after awhile the profusion of gore got to me. I was no longer shocked by the succession of killings. Too much is too much. At certain points in this story the blood letting gets impossible to top. Certainly you will not be bored although you might have to turn away on occasion.
But logic escapes this story. It ends up not making any sense at all and makes Psycho look like a church picnic. That's when camp takes over. Jessica Lange understands this but Connie Britton tries for subtle touches which are not needed.
AHS emerges as extremely indulgent when what was really called for was a dash of subtelty.
But I effortlessly predict the sales of renovated old dark houses will slip as long as AHS is runs on FX Canada.
AMERICAN HORROR STORY PREMIERES ON FX CANADA ON MONDAY OCT. 31 AT 9 P.M.
MY RATING: ***.
Posted by james bawden at 10:07 PM

Really informative about American Horror Story on FX Canada.
Nice inserting story i like it

Thank you so much!!