Jayne Eastwood And I 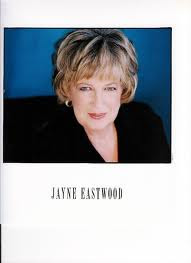 Jane Eastwood And I, we go way, way back in Canadian TV.
I was a very young summer student reporter for The Globe And Mail in July, 1970, when entertainment editor Donn Downey despatched me to the wilds of west Toronto to interview someone he described as a "bright, new starlet.
"Her name is Jayne Eastwood," he barked "and she's in that hot new Canadian flick Goin' Down The Road."
Wait a minute! A new Canadian "flick" that was hot?
Well, I went to the cinema that night to catch Eastwood and company and boy was she mesmerizing in this brilliant movie directed by Don Shebib.
And all of a sudden critics were talking about the birth of Canadian cinema.
It never happened but that didn't stop Eastwood from sashaying into one of Canadian TV's biggest stars.
I remember how hot it was that day and the bareness of her apartment --the only piece of furniture she had was a lumpy mattress on the floor.
I seem to recall a cat named Frank although that might be from a later visit.
She was funny, she was sassy and willingly posed on the back porch waving a bottle of beer as if still in character as GDTR's Betty. It all added up to a great story although stodgy Globe editors remained unimpressed.
Only later was I to learn Downey's brother was her agent. But no matter. She made for a delicious interview and fopr a few years after that she was much sough after.
I interviewed other starlets in those years and most of them were never heard from again.
But Eastwood persevered. She became ever more busy with the passing of the years.
She was the original choice to co-star with Al Waxman in the CBS sitcom King Of Kensington but was pregnant with her first child and only got onto the show in its last years (1978-80) after original star Fiona Reid decided to quit.
I definitely remember a reunion with Eastwood who was rehearsing for a live drama at CBC with expatriate Canadian actress Allyn Ann McLerie but it is not listed among her credits. Hey you guys at IMDB look out!
I definitely caught up with her again on the promising CBC sitcom Material World (1990-92). Her dressing room was next to Chris Potter who would be her co-star on Zoe Busiek: Wild Card (2003). a decade later.
When she was later dropped from the show the series started to tank.
Of course there were dozens of other credits:guest spots on Friday The 13th, Mom P.I.,Ray Bradbury Theater, Night Heat. It's a virtual who's who of Canadian TV.
One time I sat with Jayne and her delightful brother at the Gemini awards.
And thank goodness she finally received the prestigious Earle Grey awards for her contributions to Canadian TV.
Family commitments kept her from defecting to Hollywood decades ago. She could have been a big star down there.
Her career most closely resembles Barbara Hamilton's. Both had a firm commitment to country and with their verisimiltude they could always find quality work here.
In recent years Jayne, 65, has had a choice recurring role on Little Mosque and two more projects are in post production (Dark Star Hollow, The Story Of Luke).
It couldn't happen to a more talented actress.
And TV and movies have only been part of her career. Check her out in person in the revue Women Fully Clothed where she more than holds her own.
Sorry!Have to ring off now. I'm off to see Down The Road Again, the sequel that only took 41 years to come together.
Posted by james bawden at 10:48 PM

Thanks for the article. I loved watching her in "Material World" and "Wild Card". And of course I am always happy to read the name "Chris Potter" :D