Does The CBC Have A Future? 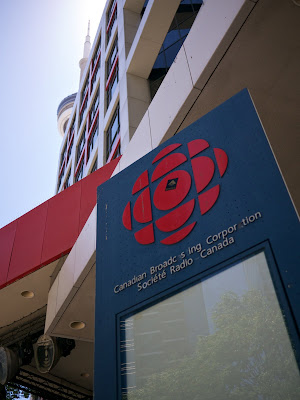 So there I was in the gigantic atrium of the CBC on Front Street. I was there at the invitation of veteran publicist David McCaughna to meet and interview the RCAF gang on the occasion of the publishing of a book of reminiscences.
But I never got near the comedians. There was a long and slowly moving line of well wishers who had purchased copies and wanted their volumes personally autographed.
So what I did was mingle with old friends. And reminisce about the number of times over the decades I've been in this great barn of a building.
It's the last gasp of Trudeau LIberalism based on the theory "Build it And They Will Come". But this barn never worked from the beginning.
When I started out as TV critic of The Hamilton Spectator in 1970 the CBC was in full throttle.
Remember this was in the days of the 10-channel TV universe. CBC had a prominent part although actual production was all over the city in those days.
CBC's Front Page Challenge was telecast from studios way up Yonge street. Other facilities were based at Mutual street.
Everything was cramped: I was once watching Norman Campbell direct a TV ballet and the dancers were huddled on the street in advance. They had to come flying through the open door and bounce onto the stage in one go.
These days CBC has the cavernous Norman Campbell studio atop its building but CBC lacks funds to actually make artistic programs there.
Once taking tea with Campbell in his offices (he has since passed), he mentioned he'd never actually been able to film anything in the studio named after him.
Looking around at the impressive building I was told by one veteran it's more than half empty these days. Live TV is no more outside of the news. Dramatic stuff has been taken over by independent companies who prefer cheaper facilities --usually abandoned warehouses in the fringes of the city.
One veteran told me CBC these days is shell shocked over the huge drop in ratings this fall --shows are down by as much as 30 per cent.
CBC researchers are blaming the end of analog TV and conversion to digital TV --apparently it is being felt not in Toronto but in outlying rural areas and certainly in less populated provinces. Viewers who are elderly or poor or both just have abandoned TV altogether.
Does CBC have a future with a right wing Conservative federal government suspicious of the very notion of public TV? Well, I'd like to point out CBC initially was the brainchild of a Tory prime minister: R.B. Bennett in 1935.
Viewers out there are indifferent I submit particularly those who jettisoned the CBC after it dropped all cultural programs.
Meanwhile the National is experiencing some of its lowest ever ratings after being re-designed by a team of American consultants who added a lot of style and took away a lot of substance.
And by the way I'm stilll waiting for my RCAF book. McCaughna says he'll get it autographed for me and give it to me later.
Posted by james bawden at 12:58 AM

Dumb it down, and they will go.