River Monsters Is Back 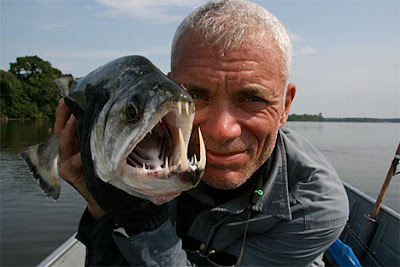 Now here's some good news what with the TV season receding into reruns: River Monsters is back!
It's season three already for one of my favorite nature shows but one with a violent title and some residue of those other reality series.
This time the wonderfully named angler Jeremy Wade really does wade into it.
He's travelled for 48 hours to get to the meandering Sepik River in Papua New Guinea as he investigates some pretty horrible mauling local folk have taken at the hands of a mysterious river creature.
Despite its name each hour is chock full of fascinating details of little seen areas of the world.
We get a quick tour of the land of headhunters and cannibalism and the river tribes who are cut off from modern civilization.
There are over 700 dialects spokenamong the people but strangely one guide does speak English as he shows Wade all the mysteries of the Sepik.
The name of the episode, dramatically enough, is The Mutilator and something deep in the waters has been preying on the actual fisherman, catching them off guard as they bathe in the shallows and tearing off huge swathes of flesh --several men have been reported dead after such bloody encounters.
The incidents are recreated here with some detail --that's the Reality TV part of the program and they always come up before the next break which is one of the cliches of the genre.
But the less showy moments are the most worthwhile. First Wade fishes to find all the kinds of fish and sees that the river is weak in species.
However he does come upon one fish that looks familiar: scientists from the fisheries have introduced from the Amazon a vegetarian fish called pacu and the ones Wade catches are very tiny indeed but with huge teeth needed to crack open the nuts they devour. This could hardly be the goliath he's looking for.
Then there's a night expedition to search for crocs which have killed inhabitants along the banks before.
But his tour guide says crocs are in decline as the vast lakes of weeds disappear --something is eating all the vegetation, too.
Surprise! It's the pacu who have turned to flesh in this new environment and grown into huge critters which could indeed tear off a man's hand.
It's what Wade calls the perils of "introduction" --introducing a new species into a river system where it faces few predators . In 15 years in the Sepik the pacu are ravaging men and small crocs.
And another mystery of River Monsters could be solved.
And one final warning: pacu have been found in river systems in 19 different U.S. states so watch out!
RIVER MONSTERS 3 PREMIERES ON DISCOVERY TUESD. MAY 24 AT 9 P.M.
MY RATING: *** 1/2.
Posted by james bawden at 1:51 AM