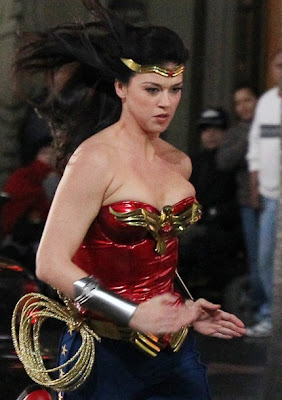 This is what I know for now about the new TV season:
1. Wonder Woman Is Toast! The projected new version of Wonder Woman from David E. Kelly has been summarily rejected. Or so say my NBC contacts.
This remake had been hyped over many months. The star was 27-year old Adrianne Palicki from Friday Night Lights. And she seemed to don Lynda Carter's old duds.
And Liz Hurley had even been signed to play Wonder Woman's nemesis Veronica Cole.
And Then came the pilot screenings and the underwhelming reaction from audiences.
NBC's fall schedule comes out next week. And I'm saying it will be without Wonder Woman.
2. Person Of Interest: My CBS sources say the Tiffany of the networks has definitely picked up the J.J. Abrams pilot Persons Of Interest.
Michael Emerson from Lost plays the billionaire waging a personal war on crime who hires a former CIA agent (Jim Caviezel) to help him.
The buzz on this one has been excellent. Taraji P. Henson (Boston Legal) is a detective helping the two guys.
3. Two Broke Girls: Another pick up by CBS is Two Broke Girls starring Kat Dennings (Thor) and Beth Behrs as best buds trying to get by in the very expensive city of New York.
And CBS is saying it took the CBS Sarah Michelle Gellar pilot Ringer and has sent it to The CW where it may yet emerge as a fall series
4. Couric's Last Stand: As we bid welcome to the new season it's time to say farewell to Katie Couric whose stewardship of the CBS Evening News didn't turn out so well.
After almost five seasons as CBS anchor she'd ditching evenings and will probably host an Oprah-like afternoon chatter outing that may well be syndicated to CBS stations.
Scott Pelley takes over on June 6.
5. Ratings, ratings: Who says weak ratings automatically mean a pink slip?
NBC has picked up the series Chuck for a fifth season. And there's a "but". It will be a pick up for only 13 more episodes and then the series will definitely be over. At NBC but maybe it can be shopped elsewhere?
6. And ABC: ABC has cancelled Brothers And Sisters which was expected. Also gone are V, No Ordinary Family (which I really liked), Detroit 1-8-7 and Off the Map. ABC also chucked Mr. Sushine and star Matthew Perry is going back into rehabilitation. And ABC has picked up the third ever version of Charlie's Angels. Sure, everyone remembers the first with Farrah Fawcett but am I the only one who remembers the short-lived second version?
There. That's all I know. For now.
Posted by james bawden at 9:16 PM