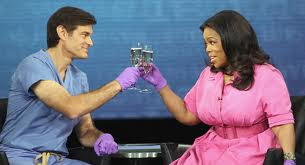 The U.S. media treated the final show from Oprah Winfrey as a sort of beatification ceremony.
Let's make this clear: Oprah cancelled herself.
And none too soon --her ratings were slipping, her audiece was getting older. A few more shaky seasons and she'd be in the same perilous condition as afternoon soaps.
I never quite bought into the Opraj myth.
She saw herself as a sort of TV Lady Bountiful, bestowing favors on a grateful audience.
Afternoon talk shows used to star Merv Griffin or some sort of clone and be filled with faded Broadway and Hollywood stars plugging their wares.
Phil Donahue changed all that --remember he was Oprah's precursor. Sure, Phil did crazy things and many silly shows but he also upped the content. He was America's caring Liberal for most of the 1970s and 1980s until dethroned by Oprah.
She was cagier about content --expertly mixing makeovers with star confessions.
She was best at selling Oprah, in this she was one of TV's best ever plug masters.
She put herself into every story, chatted away about her adventures.
And she was human, too, as she relentlessly fought and refought her own version of the Battle of the Bulge.
Being a woman of color was a tremendous significance. Make no mistake about it she paved the way for America's first black president.
She had a book corner where she plugged books she liked --when did Merv ever do that?
She wore her conscience on her sleeve and as America lurched to the right in recent years she must have found the going tough.
Now she has her own network OWN which so far is just a bunch of badly made reality shows.
Once Oprah was scheduled to chatter with the visiting press corps in Los Angeles and she went on and on about her fabulous new diet and her slimming regimen.
But earlier at breakfast in another part of the hotel I had watched as she gnawed through a heaping platter of pancakes laced with maple syrup.
As Oprah chattered on about her newfound slimness our eyes met and she recognized me from the next breakfast table and winked several times, enjoying our own joke at her expense.
And, yes, in the ensuing months she quickly gained back all her lost pounds and then some. See, that was why she flourished, it was her vulnerability.
Like I said Oprah was at best when peddling Oprah.
And I'm sure Oprah would like to know that Wednesday's rating on CTV was just about her best ever: a startling 1.6 million Canadian devoted fans catching every sigh, every teary glance.
It was Oprah at her best, prpud, defiant, tearful, humble, you name it.
And the notion of Katie Couric trying to become the new afternoon talk queen of American TV this fall fills me with dread.
I was never that into Oprah. But strange to say already I'm missing her.
Posted by james bawden at 11:53 PM