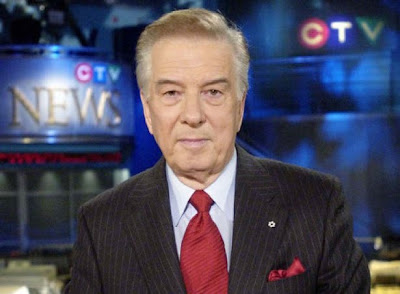 Who says Canadian politics is dull?
Last night's live coverage of the 2011 election had everything and then some.
There was the graciousness of Michael Ignatieff who led his Liberal party to its worst defeat since Confederation.
Ignatieff might have harped on how the government's nasty and inaccurate political ads against him over a full year had brought campaigning to a new low.
But he didn't instead becoming the John Kerry of this campaign and rising to rhetorical heights in describing how he loved Canada.
And he wasn't the only political leader whose future crashed and burned before our very eyes.
There was the Bloc leader Gilles Duceppe who looked completely stunned as his party slipped nearly into oblivion. There was great human drama.
Mr. Duceppe mentioned his 23 years in Ottawa meaning this resolute separatist is on tap to receive a hearty federalist pension for the rest of his days.
I kept dial twiddling between CTV's Old Man River Lloyd Robertson and CBC's equally sage Peter Mansbridge.
On the whole I felt CTV's team stronger, the graphics better presented and the experts better focused including Pam Wallin, now a Tory Senator, but back with Lloyd for the night.
I wonder if she was thinking that maybe, just maybe, if she had stuck it out with CTV she might be inheriting his seat instead of Lisa LaFlamme.
the way Uncle Lloyd effortlessly kept the conversation flowing was amazing. CTV will surely miss him if he ever does quit as threatened.
But one of his CTV buddies recently told me: "Lloyd's not going anywhere.
I sincerely hope not.
I liked that Lloyd sat at a desk with commentators seated beside him.
I didn't like Mansbridge's wanderlust as he roamed freely among CBC correspondents.
Also, CBC graphics didn't seem like much.
Yes, the political faces changed at the federal level.
But I missed Tom Clark who has decamped from CTV and Kevin Newman who left Global. Were they watching a home? And what network were they watching I wonder.
This political night had just about everything.
What I didn't like was the fact that polls closed all across the country at the same time: 9:30 p.m.
This meant a deluge of information that I couldn't absorb so quickly. I remember the 1972 election when the Tories won 5 of the 7 ridings in Newfoundland and that result was projected across the country for a Stanfield win. In fact the very opposite happened: a Trudeau deluge.
Big news of the night was the switch off of the Bloc in Quebec and the emergence of the NDP. That means Jack Layton will be in charge of 59 new Quebec members and some have no political training at all.
The historical analogy happened when the Social Credit party was overwhelmed by French-speaking members and eventually got torn in two pieces. Remember when Real Caouette formed his own party?
I didn't hear anybody talking about the fact Ignatieff was burdened by the face the Liberals were already in power in the three biggest provinces: B.C., Ontario and Quebec and all three regimes are vastly popular.
Who really won last night?
The Canadian system. You the people.
Here there was an election in an area larger than the U.S. and yet all the ballots got hand counted within a few hours without any hanging chads or suspicions of chicanery.
That's the way we do it. Effortlessly. It's the Canadian way.
No Tabloid TV messing around without core values.
It made for several hours of riveting TV. Reality TV, Canadian style.
But no more national elections for awhile. Please.
I don't think I can stand the excitement anytime soon.
Posted by james bawden at 12:10 AM