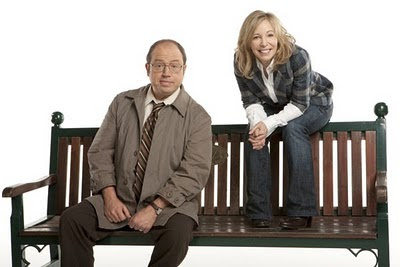 The big trouble with CTV's comedy series Hiccups is simply this: It isn't Corner Gas.
And that's the reason people I've talked to are still iffy about this sophomore comedy entry.
After all it's hard not to make comparisons
Brent Butt and Nancy Robertson were both front and center on Corner Gas, turning it into a huge, unexpected ratings winner for CTV.
Butt voluntarily pulled the plug although the series could have gone on and on.
But he opted to create a new show for wife Robertson and after the usual production problems with the pilot stepped in and took over the role of Stan, the life coach, who has set up offices but has no patients as yet until the very strange authoress Millie (Robertson) wanders in one day and can't stop talking.
In Corner Gas Butt helped create a parallel universe where he was front and center but surrounded by a lovable bunch of crazies --in effect Butt was the Mary Tyler Moore character and we saw everyone else filtered through his experiences.
The dynamics are changed in hiccups because the central character, Millie, is always "on" --she talks nonstop, interacts with everyone anfd everything.
Watching her antics exhausts me because she's so unpredictable. And other viewers I've talked to say the same thing.
The closest analogy I can come up with is the old sitcom Phyllis which took a central character from The Mary Tyler Moore Show and plopped her into a whole new sitcom.
As wonderfully played by Cloris Leachman Phyllis was too too much of everything. You know what I mean? She was too funny too much of the time.
The crazies on Mary Tyler Moore came in and out of the action but here it's Millie who Butt has peversely made the star.
I would have thought that after a shaky first season Butt would have understood this problem with the central character and done some fine tuning.
Millie in the first new episode does go to Hollywood with Stan in tow and there are the usual gags. And other characters seem to be getting more front and center attention.
But so far the attempt to create a parallel comic universe out there isn't working to the extent Corner Gas worked.
Look, I have enormous respect for Robertson --I remember interviewing her once in a Toronto steak house and being impressed by her comedic gifts. She was awfully nice that day and I could understand how hard she'd worked to make CG such a success.
And Butt can usually do no wrong most of the time as far as I'm concerned.
I watched the first two new episodes and I did laugh on occasion. But I was also irked by the implausibility of the basic concept. It just doesn't work for me.
Call it the cure of the Big Success. As Mary Tyler Moore once reminded me after her huge success she made two more sitcoms which viewers didn't want to see. And Robert Young had a huge stinker after all those years on Father Knows Best before he regained his popularity with Marcus Welby.
By the way Episode 2 with Millie stopping talking seems far more successful --and soothing --and allows the other members to get out and stretch in comedy style.
And I want to mention them because they are so full of possibilities: Laurta Soltis is the publisher Joyce, David Ingram is the agent Taylor, Emily Perkins is Crystal and Paula Rivera is Anna.
Because I'm still rooting for hiccups to make it, I really am.
THE SECOND SEASON OF HICCUPS PREMIERES ON CTV MOND. MAY 30 AT 8 P.M. ET.
MY RATING: ***.
Posted by james bawden at 8:09 PM