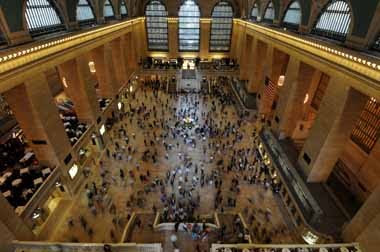 You say you've only got time to watch one program on TV this weekend?
Make it Nerve Center which debuts Sunday night at 8 with back-to-back hour episodes.
First up there's a fast-paced hourlong visit to Grand Central Station --it's a day in the life account about the 3,000 employees and the huge problems in keeping the commuter trains moving.
Then an hour later comes an even more terrific episode --a peek behind the scenes at famous Cirque du Soleil's O production which is performed nightly in Las Vegas.
The Grand Central footage is exciting because it is startling real. No rehearsals. Nothing made up --the cure of most reality shows..
It starts during the early morning rush (at 8:49 a.m.) during the peak that sees one train stuck because of a collapsed bridge --angry riders will have to be mollified and buses despatched as quickly as possible.
We see how security police protect the million daily passengers --since 9/11 the terminal staff have been extra jitterty.
And we watched the well oiled precision when one train is stalled because of an injured passenger --getting her to a waiting ambulance takes only six minutes because it's an almost daily occurrence.
There's the "information lady" handling 1,000 queries an hour. And the team of air conditioning experts who hustle to repair a leaking valve. When the electrical track shorts the experts know one false move and somebody could die. And there are the teams in the boiler room who never see daylight they're so far underground.
This one has been expertly shot like a reality TV outing but without any of the phoniness. The tension here is genuine and thus that more exciting.
In the second hour "Cirque du Soleil: O, Las Vegas" we go behind the scenes at one of the most intricate of live spectaculars.
And not only behind the scenes we see the underwater heroics performed nightly by frogmen to assure the performers are quickly taken care of if their dives are mistimed.
It means seeing how the 85 performers rehearse all afternoon on aerial tricks that could turn deadly with one false move to watching a new girl inherit center stage and be able to perform an amazing plunge with just one afternoon of training.
And we see how all the talents mesh into one seamless act from the army of electricians to the choreographer who has to know when to step back and simply let the performer accomplish the magic. Breathtaking is the only word I can think of to summon up the excitement of this group profile.
Nerve Center is back May 29 with a look at how the Panama canal was completed and a look at the world's busiest airport: Atlanta National Airport.
Nerve Center, made by Exploration Production Inc (EPI), is the best thing on TV this week, I'm sure of it.
NERVE CENTER DEBUTS SUN. MAY 8 ON DISCOVERY AT 8 P/.M/
MY RATING: ****.
Posted by james bawden at 11:26 PM

I had high hopes for this series. However the writing disappoints. Can't they find some other theme than the imminent crisis? Does everything have to be seconds from disaster?

I have really gotten tired of this on Discovery Canada shows.