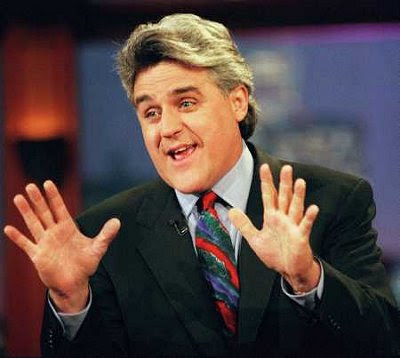 Tonight's the night the biggest mistake in TV history finally gets unplugged.
Yes, I'm referring to the positively dreadful and mostly unfunny The Jay Leno Show created by NBC last September to stem the tide of all those provocative 10 p.m. dramas the other networks were offering up.
Jay said from the start he didn't want to do it. And his blase appearances only substantiated that. Jokes were dull and listless. Guests seem bored with it all. The stupid routines we put up with at 11:35 seemed downwright awful 90 minutesd earlier.
This was a bad 11:35 show trying to fit in at 10 p,m, and it never had a chance.
So NBC cancelled it, ordered Leno back to 11:35 in a half hour format and rescheduled Conan O'Brien at 12:05.
And then all hell broke loose. Conan refused to move and eventually settled with NBC for something like $45 million.
Leno got his show back but lost his respect.
He finally had to go on to Oprah, the last bastion for people who've just lost it. Leno is the big loser, Conan the winner --with all that money he can defect to FOX any time after September.
NBC now has five hours of prime time at 10 and not enough quality shows to fill the gap. It takes several years to develop top new dramas and with most producers alienated from the peacock proud network what else is there?
Well, NBC sources say some Law & Order stuff will be plopped in and also Dateline NBC on Friday.
NBC tried to save some money and wound up buying off one of its top stars who'll surely come back on another web to rattle the network.
Anyhow Jay's last gig is tonight. I know I'll be watching closely. For the first time in months that is.
One other victim: it's Citytv which picked up the show for its Canadian stations and now quickly needs five hours a week of filler.
THE LAST JAY LENO SHOW IS ON NBC AND CITYTV TUESDAY AT 11:35 P.M.
POSTSCRIPT: If only Leno could have been as good as he was in his final outing he might have lasted longer at 10. Opening montage of moments from the ill fated show were funny and so was the inevitable appearance of Donald Trump via satellite to intone "You're fired!" The Anton Kutcher segment had some laughs as the young star gamely caught footballs in various kinds of weather. And there was a giggly interview with Precious star Gabourey Sidibe. But now it's all over. Jay returns to his old post March 1.Sigh.
Posted by james bawden at 3:22 AM