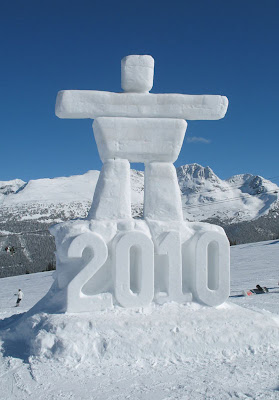 American Idol won gold Tuesday night against NBC's mighty Olympics coverage in the U.S. TV ratings wars.
A huge audience of 23 million watched Idol on Fox against 20.3 million viewers who chose NBC's Olympics coverage.
But Idol also smashed its way to victory four years ago against the Torino Winter Olympics.
NBC says its telecast of the opening ceremonies from Vancouver reached 33 million viewers making it the most watched U.S.program of the week.
NBC has been heavily criticized for not showing all the events live. The Tuesday snowboarding was seen on a taped delay basis and NBC chose to go live on the east coast with figure skating,
And even in the west events are being shown tape delayed even though Vancouver is within the same time zone.
Meanwhile Mark Adams, director of communications for the International Olympic Committee, says he does not recognize the portrait of the games as drawn by the British press.
"You wonder from what city they're reporting. What they're sayinmg bears absolutely no relation to what I've seen at the competitions."
Stories included coverage of the fatality and the cancellation of 20,000 tickets at the snowboarding venue.
Posted by james bawden at 2:41 PM