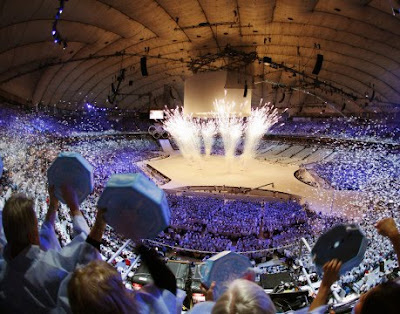 Now this is more like it. CTV claims the overnight ratings on the opening ceremonies of the Vancouver Winter Olympics went through the roof.
Beautifully staged (except for that hydraulic problem), the ceremonies showed the world what Canada is all about.
CTV says on average 13.3 million Canadians watched every single minute of the 3.5 hour ceremony.
World viewers got a sumptuous recreation of Canadian history through the cultural aspects of the aboriginal people and the changing seasons.
And there was the loss on the first day of the young luge participant from Georgia who was fittingly remembered.
Great moments: how about k.d. lang's performance or the march in of so many home grown celebrities from Donald Sutherland to Anne Murray?
And the selection of many well known athletes to collectively light the flame was brilliant.
Previously the Gold Medal hockey game at Salt Lake City in 2002 attracted 10.3 million.
CTV says 23 million viewers or two out of every three Canadians (69%) tuned in to some part of the ceremony.
By contrast 4.24 million Canadians watched the opening games in Calgary in 1988 and 1.64 million watched the opening ceremonies of Beijing in 2008.
Says CTV:"A total of 26 million Canadians representing 78 % of the population experienced the 2010 Winter Games on the platforms of Canada's Olympic Broadcast Media Consortium.
Posted by james bawden at 2:28 PM