Badge Of Pride A Must See 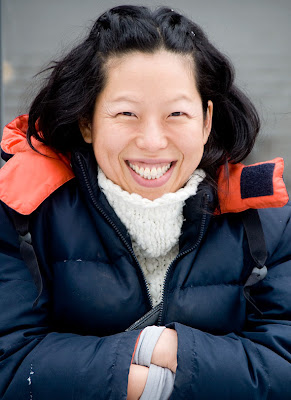 Here it is 40 years after I first started reviewing TV for The Globe And Mail.
I was a summer student back then and my TV critic travels subsequently took me to The Spectator, The Toronto Star and finally my own webpage.
But I still get that same frisson of fear and anticipation whenever I pop in a new DVD preview of an upcoming TV show (back in 1970 I had to constantly travel to network screening rooms).
And I haven't been as pleasantly surprised in some time as when I popped in the outstanding new documentary Badge Of Pride which got jostled by TV coverage of Haiti and is now premiering Wed. Feb. 3 at 10 p.m.
The method is simplicity itself. Filmmaker Min Sook Lee got permission from the Toronto Police Force to take her roving camera inside the working of the police including office work and street patrols.
She filmed for a year off and on documenting what it truly is like to be a Toronto cop and also be out.
She had few takers for her group profile. She was finally able to get two lesbians and two gays to agree to be documented.
But in a force of over 7,000 that is a surprisingly low number.
First let's tackle the subject matter. The film is so outstanding and filled with such insights it deserves its pride of place on the national network.
But given the touchy theme I can well anticipate why it runs instead on CBC News Network although I'm hardly suggesting The Passionate Eye is the "B" team. But I'd like as many people to see it as possible because of its depth and compassion.
Lee starts on one Gay Pride festival and ends a year later and the irony is apparent. The first Pride event was a declaration of war against the Toronto force for arresting 300 "suspects" in the 1981 bath house busting.
And this was followed in September 2000 by the force's "Painty Raid" against a lesbian bar.
One of those lesbian protestors is profiled here --she subsequently enrolled in the Ontario Police academy and became a respected constable.
But as the film unfolds her sense of self and confidence starts unravelling as superiors interrogate her about participating in such a film. She's simply worn out by the constant level of gratuitous insults.
A gay constable who has not experienced such treatment is filmed out on assignment with his patrol partner who says everything is fine but declines a sleep over at his house which was necessitated by an early court appearance the next day. He instead chooses to bunk down with a straight colleague.
Another lesbian says the culture of the force is such that when she first came onboard all women were discounted. Despite a fine service record she has not been promoted up the ranks and the reason seems clear to her.
Another gay cop recounts a lengthy campaign of harassment by others who'd phone his home anonymously and park outside his home in an attempt to out him. But he made not formal protests although the stress has forced him to take months off for sick leave.
Lee's camera is unobtrusive, she seems to be only making a record of what's happening. But she expertly draws us into the life of cops and in doing so demystifies them.
We witness how this particular closed society operates, how the all male atmosphere is pervasive even to this day.
The emotional roller coaster we are forced to ride with these four people produces disquieting moments. Victories are few. It's a method of working around the inequalities which clearly exist.
"If you leave, they win," says one of the women. She sees herself as opening the door for other people who'll eventually get the promotions she deserves.
Every sprawling corporation has a clear and distinct culture. The fascination in Badge Of Pride lies in watching policing laid out for us, showing how it affects every police employee.
There's nothing at all to shock the sensibilities here and that's as it should be. Lee is after deeper meanings specifically the art of coping in an often hostile or indifferent environment. The result is a consistently fascinating look at a culture that up to now has mostly preferred to keep its doors shut tight to outsiders.
BADGE OF PRIDE WILL NOW RUN WED. FEB. 3 AT 10 P.M. ON THE PASSIONATE EYE ON CBC NEWS NETWORK.
MY RATING: ****.
Posted by james bawden at 12:35 AM

I watched Badge of Pride last night. I thought it was well done, but was left with a negative feeling about what Min Sook Lee was trying to accomplish. The Toronto Police Department has made huge positive strides, in a few short years, in their acceptance of homosexuals, but it doesn't seem to be enough for her. She portrays three officers as beaten down by a homophobic system, two with health problems and one with a serious chip on her shoulder. The fourth officer is then portrayed as a naive recruit that will soon learn that straight people will get him one day. The Toronto Police Department is growing, like most other large public entities, and learning to accept people of all walks of life; acceptance of gays and lesbians has never been better and can only continue to improve. Rather than focus on the negative experiences and perceptions of a few officers, Min Sook Lee should celebrate the positive strides the police department has made over the last few years. I did take hope from the statement Detective Noseworthy made about her being part of the first-wave, and that the second and third-wave will prove to be much better.

It should go without saying that a person should be allowed to marry whomever they choose. Until the right-wing, religious fanatics in this country stop trying to control everybody else and force their “morals” down the throat of the country, there can be no real freedom in the United States. Civil rights cannot simply be "voted away," that is the purpose of the Bill of Rights. Religious activists should be left out of these decisions completely. I invite you to my web pages devoted to raising awareness on this puritan attack on our freedom: http://freethegods.blogspot.com/2009/06/san-franciscos-gay-pride-parade.html