My Beef Of The Week 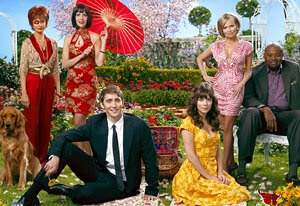 Ob Dec. 17 ABC finally cut the plug on the ratings anemic series Pushing Daisies. I'm calling it one of the victims of the writers' strike.
The series was so quirky but brilliant that it needed a careful buildup and lots of promotion. But ABC never quite knew what to do with it. After cancellation the network was besieged by fans demanding an honorable burial so the web promised that the three last episodes would run off during the summer.
So ABC is running off these three episodes Saturday nights at 10 in with a story line that has been re-edited by creator Bryan Fuller (Heroes).
Trouble is I can't for the life of me remember the plot seven months later. I only know the series was so fresh and unusual it never should have gone to network TV. Cable was surely its best hoped for berth.
But thankfully there's DVD and the compleat final season hits the stores July 21. Then I'll be able to watch all the second season at one go and regret the passing of one of American TV's best comedies of recent years.
Posted by james bawden at 3:26 AM