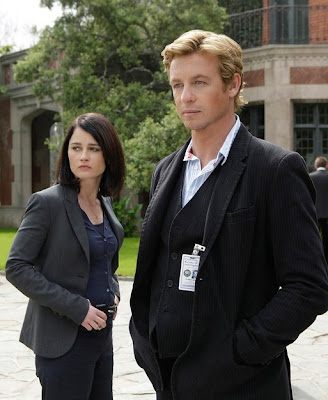 Why am I completely unsurprised at CBS's fall schedule announced on Wednesday?
CBS is the only U.S. network to have gained in total audience this past season and its rafter of tried and true procedurals all seem to be raring to go --again.
But CBS has to look at NBC's past mistakes when the peacock proud network refused to cancel shows past their prime.
So these days once dominant NBC is the fourth ranked web--it's even behind lowly Fox.
Big news is the move of The Mentalist to Thursday nights at 10 plus the introduction of three new hour dramas and one new sitcom.
And, yes, as predicted in the trade papers Medium is moving over from NBC to CBS.
On Thursday nights at 10 The Mentalist will try to break a curse. Last season CBS debuted two new dramas in the slot after CSI only to see both Eleventh Hour and Harper's Island ctash and burn.
Don't ask me why CBS is moving The Big Bang Theory from Mondays at 8 to 9:30 p.m. behind Two And A Half Men. And How I Met Your Mother returns to the 8 p.m. slot. That provides a big push to CBS's new Jenna Effman sitcom Accidentally On Purpose at 8:30.
Medium which is actually made by CBS Studios moves to Fridays ar 9 where it will be book ended by Ghost Whisperer and Number$.
CBS will also have a spinoff of NCIS, the drama The Good Wife on Tuesdays and Three Rivers which will run Sundays.
Waiting in the wings are new shows Miami Trauma, The Bridge and a comedy Rules Of Engagement. And the CFTO-produced Flashpoint will be held in reserve as a midseason replacement.
All in all it's a predictable schedule. Why make major changes when you're the number one network?
PICTURED: SIMON BAKER, ROBIN TUNNEY in THE MENTALIST.
Posted by james bawden at 8:34 PM