Farewell And Hello Again To Leno 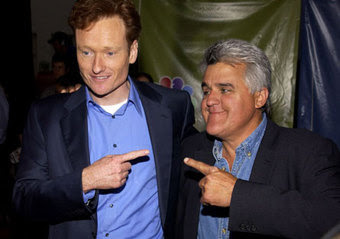 Remember the tumult 17 years ago when Johnny Carson finally retired from the Tonight Show? Well, Friday night it was Jay Leno's time to leave but the ceremony wasn't half as momentous --or sad.
Leno is being forced out of his 11:30 slot by NBC executives worried his audience is aging.
To garner younger viewers they are giving the Tonight slot to Conan O'Brien, 46, who has a mighty tough  task ahead of him despite all the hype.
But 17 years ago NBC blew the succession when Leno was parachuted in over Carson's pick David Letterman. NBC saw Letterman depart his NBC slot to jump to CBS and become Leno's deadliest rival.
This time Leno is getting a new 10 p.m. timeslot nightly on NBC.
In effect the peacock proud web is saying the late night talk now starts 90 minutes earl;lier.
But will viewers accommodate Leno's "new" talk show? It's a highly competitive world, this 10 p.m. slot.
Steve Allen failed with his variety show after he left Tonight. And so did Jack Paar with a prime time talk show.
NBC had already lost the 10 p.m. battle most nights to CBS procedural shows like the CSI franchise.
Leno could be swept away on competitive nights but his show comes in at a mere fraction of the cost of an hour of filmed drama.
And remember drama series only mount 22 new episodes a year --those nights when Leno faces repeats he'll surely grow in the ratings.
I've been watching Leno's week long farewell and liking what I saw.
He really zinged it to Mel Gibson and Thursday night a suddenly aged Billy Crystalgot in some great one liners plus a tribute song (Crystal with much more hair was Leno's first guest all those years ago).
And on Friday night Conan stopped by.
Evidently there's a little tension but both guys couldn't have been nicer to each other. Again there's the shock of seeing Conan at 29 when he first came on NBC and the more mature performer of today.
It was Carson who once ruminated on his tremendous popularity and said he couldn't do it in the increasingly fractured TV world of today with hundreds of channels vying for our attention.
The best that can be said of Leno is he kept the  shop open and thriving. He's a happy, open person not at all like the grouch Letterman has become. President Obama stopped by recently because he knew he'd be taken care of.
And so did Brit actor Hugh Grant after he was caught with a prostitute on Sunset Blvd.
Watching all the assembled clips last week I feel I might have been too dismissive of Leno who always tried to give us a good time.
Hardly the satirist of Carson stature and lacking Letterman's edge he nevertheless grew on viewers and many nights out was the ratings king. Which after all is the only thing that mattered at the end of each night.
Leno's new prime time outing opens for business come September.
Posted by james bawden at 2:36 AM