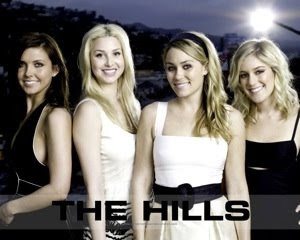 This is it folks! I refer to the finale of Season Five of The Hills which revs up Sunday night at 8 on MTV.
Are you ready for the cataclysmic event as LC (Lauren Conrad) leaves the show after what seems like a lifetime as First Lady of TV Reality.
We first spotted her as a lithesome high schooler on Laguna Beach. Then she grew up, moved outta town and headed for The Hills where she snagged a coveted job in L.A.'s fashion world within hours of hitting the town.
No matter that she lacked any sort of experience. Then she found a cute apartment and a sleek roommate in Heidi. And dated shallow hunks she never could tame. And ate at the trendiest spots on the Sunset Strip. All this on a apprentice's salary.
No matter! It was all done in front of those probing reality TV cameras. LC sported a wardrobe few could afford and when she looked for new digs she found a mansion already furnished where she could cavort with her two best buds.
Are you still with me? She shopped until she dropped. The other gals had countless boy problems but no matter. They all met every night at the swankiest watering hole and emerged in the morning picture perfect.
The fact that everything in The Hills was phony never bothered the countless fans. LC was always beautifully coiffed and made up thanks to the army of cosmeticians behind the cameras. And TMZ even caught the stars redoing scenes over and over just like the scripted dramas.
Female viewers Lauren's age took it all in. It was the dream of every twentysomething ywho watched to snag a fashion gig and hang out with these male hotties.
But Lauren finally had enough. The Hills made her fabulously rich even though her own fashion line bombed. She asked out to have her own life. But will we ever hear from her again. I'm not so sure.
On the season finale Spencer and Hedi get married for what seems to be the third time. And the others from Audrina to Lo to Justin Bobby to Stephanie all threaten to return for the sixth season.
Meanwhile rival Kristen from Laguna Beach is going to be dropped in as the new lead. The Hills without LC? We'll just have to get along without her, I reckon.
Posted by james bawden at 9:14 PM