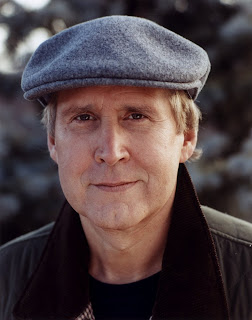 I'm surprised at the stand pat schedule announced for the fall by NBC. The peacock proud network is mired in fourth spot in the ratings.
Sorry but I don't think the introduction of Jay Leno nightly at 10 is really going to perk up ratings. I once proposed to an NBC executive that Leno run at family friendly 8 p.m. but did anybody listen to me?
Trouble at 10 will come from all those top rated CBS procedurals like its CSI triumverate. Some nights Leno will have socko guests but not every night.
NBC is picking Leno over 10 p.m. dramas precisely because he's that inexpensive and the network needs to save money right now.
The batch of new shows seem innocuous. A silver-haired Chevy Chase is back in a sitcom titled Community (set in a community adult education college). Plus there's another sitcom titled 100 Questions.
From the producer of Heroes comes an apocalyptic drama series called Day One. San Francisco is the site for a medical drama Trauma. Michelle Trachtenberg and Canadian James Tupper costar in another medic show Mercy. The old Ron Howard film Parenthood gets resurrected with Peter Krause.
And there are a batch of new reality things including Jerry Seinfeld's The Marriage Ref, Breakthrough with Tony Robbins and Who Do you Think You Are?
Nothing seems especially cutting edge which is needed to lift NBC out of its ratungs doldrums.
This looks like the schedule of a network in free fall.
Posted by james bawden at 3:08 PM