Another British Spin Off For Canadian TV? 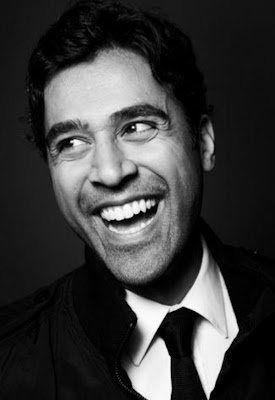 Quick! Can anybody think of a British series that got a Canadian TV spin off?
Well, I can, so there. Let's time travel way back to the time CTV had a Canadian version of The Avengers starring our own Linda Thorson.
And currently running on HGTV there are homegrown versions of two U.L. hits: The Unsellables and Colin And Justin.
So it was just a matter of time before we got How To Look Good Naked Canada, right?
Here's where I admit I never watched a full edition of the original British edition.
But I did catch the premier episode of HTLGC with Canadian host Zain Meghji.
The poster arts hows Meghji peering over a clothes line of women's panties but the show is anything but exploitative.
"First we advertised in the papers, that sort of thing," Meghji tells me. "The response was huge."
Then prospective candidates were interviewed and a spectrum selected --no two women could be the same type.
The fourth episode to be made is actually the first out of the box and that makes sense becauseMenghji and crew needed time to come up with the formulas.
Made by Insight Productions for W Network, this one is pleasant enough and has a few surprises.
"First of all we're not saying new clothes, new hairdo are going to solve anybody's problems," Menghji explains. "But it might jump start a person, I think that's entirely possible."
I'd guestimate Meghji is in his early thirties and he's always impeccably under dressed in this show although he adds the clothes are his own.
But I remember once watching him walk up Yonge Street in grungy attire. However, he still looked spiffy and seemed oblivious to the stares from E! fans.
He was then a featured interviewer on E! and his unenviable job was to chatter up very tired movie stars who were doing a full day's worth of promotions for their latest celluloid epic.
Instead of the usual industry p.r. Menghji got them laughing at something weird that happened or asked them if they'd behaved as outrageously as their characters in private.
I had typecast him as an entertainment reporter which may be one reason he took a walk in June and settled into this very different show.
"Each week there's a different woman and we'll show how they can face their flaws and come out looking great. With the first one, Jillian, I was surprised how fast she got into the groove. When a guy says she has great breasts it makes her day. Others were decidedly harder to turn around. It usually wasn't that simple."
Single mom Jillian has given up on dating and schleps around in unbecoming, baggy clothes and a hairdo that doesn't suit her. She splashes on some water on her face in the morning and walks around sans makeup and that's it.
Meghji goes through the whole routine of redressing her to de-emphasize her flaws and instead highlights her strong points. Being chubby and tiny she needs clothes that show off her other assets,
And yes there is a segment with a nude appearance on a ramp --way out in Markham for some reason (I forget).
Meghji grew up in Vancouver, has been involved in the entertainment side since he directed plays at UBC. Later he taught drama to high school students in Swindon.
He has a real flair for interviewing people and should go far. He says he wondered what might happen if a man got the same treatment for one episode. But it wouldn't be the same kind of series at all, would it.
And women viewers would tune out in jealousy, I suspect.
There are 13 hour episodes in the first year.
Later on somebody should really attempt a follow up episode looking at how far the women have come. Or have any regressed?
HOW TO LOOK GOOD NAKED CANADA PREMIERES ON W NETWORK TUESD. JAN. 5 AT 10 P.M.
Posted by james bawden at 6:45 PM