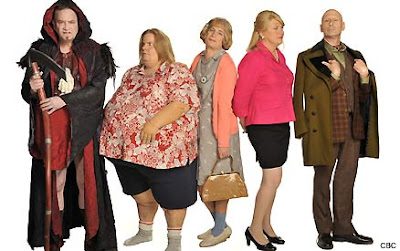 You can't go home again. Especially on TV.
That's what I always thought and I'm the TV critic who had to sit through numerous failed TV reunions over the years from the Father Knows Best get-together to a aborted attempt at pairing up Mary Tyler Moore and Valerie Harper one more time.
So it was a shock to learn Kids In The Hall were reuniting on CBC-TV after a break of 15 years.
First thought: they're not kids anymore, are they?
But wisely the guys are not back as sketch artists but in an eight-part sitcom called Death Comes To Town which revs up Tuesday Jan. 12 at 8 p.m.
It's unlike anything they've ever attempted which means comparisons are out. And it seems to owe more to Paradise Falls and Corner Gas than anything else on Canadian TV.
Gone are all the old familiar characters. The toupe instead play a wide variety of local bumpkins in a small town called Shockton (really North Bay).
The premise is very much Bruce McCullough's --his comedic sensibility is all through the story and he co-wrote the scripts with Kevin McDonald.
The story opens with a pot bellied Death alighting from the local bus with a list of people he has to kill off. Mark McKinney plays Grim Reaper complete with leather jockstrap, a large false tooth and a leather cape. And that huge stomach.
Running the town is an odious small town politician played zestfully by McCullogh; hizzonner walks into a local greasy spoon and eats fries off one patron's plate and steals a burger from another guy and for all this he's applauded.
When the missus says she put on weight after their son arrived he reminds her the kid was adopted.
"It was sympathy weight," she snaps back.
His goal in politics is to claim the 2028 Winter Games for Shockton. But at home he's hooked up with an alcoholic wife (Dave Foley) and an autistic kid he labels "retarded".
McCullough also plays Rusty the town blimp, a huge guy in a bed who orders pizzas and dreams of the time he was the town hockey fave before he let everybody down. He's also a diminutive cop who shouts murder and then runs.
Scott Thompson is hilarious as the town drug addict who tries to get by on his claim he is discriminated against because he's 1/16th aboriginal.
But he's just as funny as "Heather Weather" the ditzy local TV weather gal who tries to inject a little rain and sunshine into ever story she reports on.
And he's also the balded coroner Dusty who investigates a murder and orders everything to immediately be bagged. And he's also the local abortionist who says business is booming because of the young people in town.
Scott Foley also plays a frizzy haired cleaning attendant at the local motel where the devil is staying.
McKinney is also a female promiscuous local news reporter and a scardey cat cop.
And McDonald is great as a weasley blonde-haired TV technician. He's also a pizza delivery gal with short term memory loss.
The sight gags are often so bad they're good and the dialogue rife with triple entendres.
I think the "Kids" made a fine decision in tackling something new instead of going back in time and competing with their younger selves.
This time I hope they're back for good.
DEATH COMES TO THE TOWN PREMIERES TUESD. JAN. 12 AT 9 P.M. ON CBC-TV.
RATING: ***.
Posted by james bawden at 8:20 PM